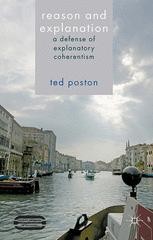 A Defense of Explanatory Coherentism

In this new explanationist account of epistemic justification, Poston argues that the explanatory virtues provide all the materials necessary for a plausible account of justified belief. There are no purely autonomous reasons. Rather reasons occur only within an explanatory coherent set of beliefs.

“In this interesting book, Ted Poston delivers an original and powerful defence of explanatory coherentism about justification. … an inspiring monograph that actually advances research in this field Scholars and postgraduates interested in the recent debate on coherentism about epistemic justification should definitely read this book.” (Luca Moretti, The Philosophical Quarterly, Vol. 67 (266), January, 2017)

"Poston presents his readers with an original, clear and sophisticated defense of both epistemic conservatism and explanatory coherentism. He couples that defense of his positive view with a formidable, sustained attack on classical foundationalism. The book is a must read for anyone interested in fundamental issues in epistemology." - Richard Fumerton, F. Wendell Miller Professor of Philosophy, University of Iowa, USA

"Ted Poston argues for holistic explanatory status as the essence of epistemic justification. This sort of account had receded from view in mainline epistemology, and Poston's argument should make it more visible, and even prominent. Whatever else epistemic normativity may encompass, holistic explanatory status is an extremely important component, as this book makes clear to the attentive reader, who will be engaged and enlightened." - Ernest Sosa, Board of Governors Professor of Philosophy, Rutgers University, USA

"This is an excellent book. Poston makes a powerful case for explanatory coherentism. Although such views have largely fallen out of favor in recent years, they seem to be poised for a comeback and Poston's book will rightly be at the forefront of explanationism's return to center stage. This is a work that anyone interested in epistemology would be well advised to study closely." - Kevin McCain, University of Alabama at Birmingham, USA

"This is a book worthy of careful study. Ted Poston develops and defends an explanationist theory of (epistemic) justification on which justification is a matter of explanatory coherence, which in turn is a matter of conservativeness, explanatory power, and simplicity. He argues that his theory is consistent with Bayesianism. He argues, moreover, that his theory is needed as a supplement to Bayesianism." - William Roche, Texas Christian University, Notre Dame Philosophical Reviews