Security, Conflict and Cooperation in the Contemporary World
Free Preview 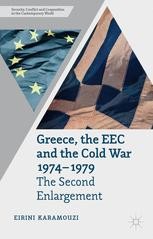 Eirini Karamouzi explores the history of the European Economic Community (EEC) in the turbulent decade of the 1970s and especially the Community's response to the fall of the Greek dictatorship and the country's application for EEC membership. The book constitutes the first multi-archival study on the second enlargement of the EEC.

Eirini Karamouzi is a Lecturer in Contemporary History at the University of Sheffield, UK. She was previously a Max Weber fellow at the European University Institute, a Lecturer in European studies and history at Yale University, USA and she held a Pinto postdoctoral fellowship at LSE IDEAS.

“This monograph is a substantial and impactful work on European Integration and Cold War history. The publication best reflects the significance and advantages of multi-archival and multilateral research. It presents, arguably for the first time, the complete picture of Greece’s entry into the EEC. Scholars will find a detailed account of how western Europe and the United States responded to the crises of southern Europe in the 1970s. … This is a well-researched and well-written book and is highly recommended.” (Athanasios Antonopoulos, European History Quarterly, Vol. 48 (4), 2018)

“This is an account from which we can learn a lot today, not merely because it sheds a different light on Greece’s place in the EU … . It also shows how EU-enlargement is about more than just the accession of one individual new member state … . book is a contribution to new Cold War history as well as the history of European Integration, while also going to the roots of issues that are relevant for the present day.” (Laurien Crump, Journal of Contemporary History, Vol. 51 (3), June, 2016)

“For its detailed historical analysis, as well as the fascinating insights that it offers about Greece’s longer-term place in the EU, Eirini Karamouzi’s new book is very welcome indeed. … as the first published analysis utilizing the full range of archival materials from this period, this book is likely to set the standard for future studies of Greece’s early relations with the EU.” (Jonathan Swarts, Journal of Modern Greek Studies, Vol. 34 (1), May, 2016)

“This monograph serves as an ideal introduction to those interested in understanding Greece’s position in the European Union. It also provides a useful insight into the decision-making process that led to a defining event in Greek history. … of direct interest not only to experts and students of contemporary Greek history and European Community history but also to all those interested in the history of the enlargement of the EEC (especially the Iberian cases) and the European institutions in general.” (Alexandros Nafpliotis, Diplomacy & Statecraft, Vol. 27 (1), 2016)

“Eirini Karamouzi’s monograph offers a timely and welcome study of Greece’s accession to the European Community. … It stands as the first detailed account of the full negotiations leading to the second enlargement, including the discussions among the Nine. … Karamouzi’s book stands as an important contribution both to our understanding of how Greece joined the Community and to current debates concerning the future of Europe.” (Luc-André Brunet, H-Net Humanities and Social Sciences, h-net.org, Vol. 17 (7), November, 2015)

“The book presents an in-depth account of the Greek accession negotiations during the latter half of the 1970s. … It serves to add to the growing cannon of scholarly research on the early enlargement rounds, nicely weaving national and EC perspectives of that process. … is very well researched and convincingly weaves together a multitude of negotiating positions, thus casting new light on how the EC went from nine to ten members in 1981.” (Michael J. Geary, H-Net Humanities and Social Sciences, h-net.org, Vol. 17 (7), November, 2015)

“A detailed historical investigation of the EC’s second enlargement has long remained a desideratum, something that Eirini Karamouzi’s timely and important book now seeks to remedy. It constitutes a well-researched and fluently written case study, valuable not only for its rich empirical findings, but also for the way in which it connects the Greek enlargement to more general themes of 1970s European politics.” (Mathias Haeussler, H-Net Humanities and Social Sciences, h-net.org, Vol. 17 (7), November, 2015)“Greece, the EEC and the Cold War, 1974-1979 is book about Greece, present and past, and its relationships with a united/ing Europe; it is a book about both the truth and falsehood in claiming the existence of structural features in the fate of nations. It is a book about the intelligence and clarifications that serious and alert contemporary history can bring to issues which were often blurred or obscured by current media handling on the story of Greece and the EU.” (Thomas Raineau, H-Net Humanities and Social Sciences, h-net.org, Vol. 17 (7), November, 2015)“Karamouzi’s volume appears to be of much interest and to offer new and stimulating interpretations, as well as a detailed analysis based on wide multi-archival research … volume is an important and seminal contribution to scholars’ knowledge of the 1970s and it is possible to agree with the author’s argument that the second enlargement posed the foundation of a sort of ‘European’ model and of a European ‘ideology’ which would have strongly influenced the characters of the EC/EU’s further enlargements.” (Antonio Varsori, H-Net Humanities and Social Sciences, h-net.org, Vol. 17 (7), November, 2015)
'Drawing on hitherto unexploited historical material, Eirini Karamouzi offers an unprecedented account of a critical period in EU and Modern Greek history with profound implications for the present. A must read for anyone interested in Greece, Cold War history, the dynamics of EU accession, the workings of EU institutions and negotiations, and ultimately the transformative impact of enlargement on European integration.' - Kalypso Nicolaidis, University of Oxford, UK

'The accession of Greece in the EEC may strike us today as a rather minor historical detail lost in the seventies. Not quite so! In her meticulously researched and highly readable book, Eirini Karamouzi shows that it was a milestone in the evolution and transformation of the European Economic Community. An important contribution to the history of the European integration, it also redirects our attention to the deeply political essence of the integration process and its powerful role in the continent's democratization.' - Stathis Kalyvas, Yale University, USA

'The story of Greece's fateful EEC accession as presented by a talented young historian; a tale very well told, with great implications both for our understanding of EU history and contemporary international issues.' - Odd Arne Westad, London School of Economics and Political Science, UK

'Karamouzi's book adds a lot to our knowledge about Greece's road to EEC membership during the 1970s and the history of EU enlargement more generally. It is deeply grounded in archival research, particularly on the Community and its member states. It demonstrates the complexity of negotiations and the transformative impact of enlargement on the Community in the long run.' - Kiran Klaus Patel, Maastricht University, Netherlands

'A scholarly and readable history of how Greece joined the EU provides a fascinating and valuable context to today's events.' - Gideon Rachman, Financial Times