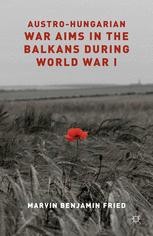 Austro-Hungarian War Aims in the Balkans during World War I

The conquest of Serbia was only one of the goals of the Austro-Hungarian Empire in the First World War; beyond this lay the desire to control much of South-East Europe. Employing previously unseen sources, Marvin Fried provides the first complete analysis of the Monarchy's war aims in the Balkans and tells the story of its imperialist ambitions.

" [...] this is a necessary book and any scholar serious about Austro-Hungary during the First World War needs to read it. The book will also be a great asset to generalists working on wartime foreign policy and decision-making process." - Reviews in History

'Although the war aims of almost all the other 1914-1918 belligerents have now been studied, those of Austria-Hungary have long been neglected. Marvin Fried's new study, based on groundbreaking archival research in both Vienna and Budapest, provides the first full-length analysis of the Habsburg Monarchy's objectives, offering not only much new information but also insights of relevance not only for the Balkan theatre but also for the history of the First World War as a whole.' - David Stevenson, London School of Economics, UK. Author of '1914-1918: The History of the First World War'.

'Marvin Fried has written the first detailed and archive based study on Austro Hungarian War aims and offers a new picture on what the government in Vienna wanted to achieve during the First World War.' - Holger Afflerbach, University of Leeds, UK. Author of Falkenhayn and The Triple Alliance

"Marvin Fried's excellent analysis of Habsburg foreign policy during the First World War is based on a meticulous knowledge of the German and Hungarian military and diplomatic sources and constitutes one of the most important books now available on the end of the Monarchy and the war itself." - Alan Sked, London School of Economics, UK. Author of 'Decline and Fall of the Habsburg Empire'.