Literatures of the Americas
Free Preview 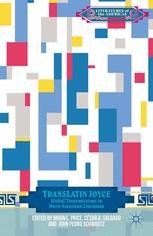 “An ambitious and successful contribution to the field, offering the first comprehensive account of Joyce’s impact upon the ‘transLatin’ literature of Iberia and the Americas. … this is an important and original collection of essays. … TransLatin Joyce is a valuable contribution to Iberian and Latin American literary history and to Joyce studies … it powerfully demonstrates the need for further explorations of the lasting impact of Anglophone modernism in the region’s letters.” (Ana Rodriguez Navas, Dissidences, Vol. 6 (11), February, 2016)

“It is compulsory reading because of both the scientific and academic rigor of its essays and the wide array of angles from which they approach the influence, inspiration, and echoes of Joyce in Iberian and Latin American texts. … It should be considered obligatory in the classroom for it sheds new light on the aesthetic dimension of Joyce in Spanish and Portuguese literature, a beacon for both the English-speaking and the Ibero-Latin-American worlds.” (Jesús Isaías Gómez-López, James Joyce Quarterly, Vol. 52 (1), 2014)

"TransLatin Joyce is a testament to the enduring relevance of Joyce to Iberian and Latin American culture. In this volume, the high modernist Joyce gives way to a Joyce attuned to the flows and exchanges of the contemporary global reality, where questions of influence and reflection have been left behind, and a new and expansive horizon of cultural production and dissemination holds sway. Joyce is masterfully shown here to be a prism through which we can read Iberian and Latin American engagements with the modern, the postmodern, and the global.' - Carlos J. Alonso, Morris A. and Alma Schapiro Professor in the Humanities, Columbia University, USA

"TransLatin Joyce represents a rich engagement with the complex chronological, intertextual, transnational, and multitranslational history and interactions between James Joyce and pre-boom, boom, and post-boom Iberian and Ibero-American writers. Although Joyce's impact and influence (for good and ill) on generations of Hispano- and Lusophone writers have long been acknowledged, this collection contributes significantly to the reconsideration of Joyce's unique role in a context that is postcolonial, postmodern, and global and to the way he serves as an exemplary subject for the comparative study of world literatures." - Alan W. Friedman, Arthur J. Thaman and Wilhelmina Doré Thaman Professor of English and Comparative Literature, University of Texas at Austin, USA

"Is Joyce's legacy at present best valued and understood from the vantage of postcolonial writing in Spanish and Portuguese? This exciting collection makes a good case for this proposition by tracing the circulation of Joycean aesthetics through the Iberian Peninsula, Mexico, Central America, South America, and the Hispanic Caribbean. A must-read not only for Joyceans but for scholars of transnational modernism, translation studies, and literature of the Americas!" - Mark Wollaeger, Professor of English, Vanderbilt University, USA