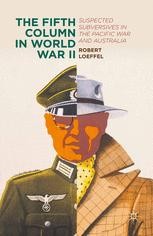 Suspected Subversives in the Pacific War and Australia

Alarming levels of fear and suspicion developed in Australia following the German victories in Europe of 1940. It was believed the Nazis had prepared an army of subversives a Fifth Column to undermine the war effort. These suspicions plagued the Australian home front for much of the war.

Robert Loeffel is Adjunct Lecturer in the School of Humanities and Languages at the University of New South Wales, Australia. He has published on German and Australian contemporary history. His previous book, Family Punishment in Nazi Germany: Sippenhaft, Terror and Fear, was released in 2012.

“The author explains how the public in Australia developed their concepts of Fifth Columns to explain why the Australians had to retreat from their thrust into Greece or the failure of a northwards push into Malaya or their defeat in Singapore. … This thorough study of public response to war scares makes for interesting history and it is a valuable contribution to the burgeoning studies of the impact of war on Australian society.” (Frank Cain, Australian Journal of Politics and History, Vol. 62 (3), September, 2016)

“Loeffel has broken new ground. It is important for those who follow to examine more closely some of the interesting areas that he could only open. The book is a good read, gripping at times, and one that should appeal beyond academic readership as a timely theme in the 21st century.” (Pam Oliver, The Journal of Pacific History, Vol. 51, March, 2016)

"Robert Loeffel's book demonstrates how fear, anxiety, suspicion, rumours and innuendo, often with little or no basis in fact, drove ideas of a 'fifth column' in Australia during the Second World War. By providing wide ranging coverage of the Fifth Column in the Second World War and by centring these events in the context of developments before the war, Robert Loeffel makes a significant contribution to our understanding of this important, but often overlooked, part of Australia's war history. Based on wide ranging national and international sources from archival documents to books and films, Loeffel's work provides excellent coverage of this important part of Australia's home front story during the Second World War." Peter J Dean, Director of Studies, Strategic and Defence Studies Centre, Australian National University

"Robert Loeffel has pulled off an impressive feat in telling the story of an influential chimera. He traces the history of something that never actually existed in Australia the 'Fifth Column' and shows how fear of it nevertheless affected Australia's political and military leaders throughout the Second World War." - Peter Stanley, University of New South Wales, Canberra, Australia