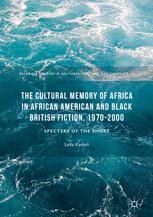 The Cultural Memory of Africa in African American and Black British Fiction, 1970-2000

Specters of the Shore

This book offers a new approach to reading the cultural memory of Africa in African American fiction from the post-Civil Rights era and in Black British fiction emerging in the wake of Thatcherism. The critical period between the decline of the Civil Rights Movement and the dawn of the twenty-first century saw a deep contrast in the distinctive narrative approaches displayed by diverse African diaspora literatures in negotiating the crisis of representing the past. Through a series of close readings of literary fiction, this work examines how the cultural memory of Africa is employed in diverse and specific negotiations of narrative time, in order to engage and shape contemporary identity and citizenship. By addressing the practice of “remembering” Africa, the book argues for the signal importance of the African diaspora’s literary interventions, and locates new paradigms for cultural identity in contemporary times.

“This book’s meticulous comparative literary approach is novel and ground breaking. It is not only highly desirable, timely and, in fact, necessary, but will endure and leave a legacy for other scholars to develop the field of trans-Atlantic (and more specifically Black Atlantic) literary studies.” (Lucienne Loh, Senior Lecturer in English Literature, University of Liverpool)

“Placing particular emphasis on the ideas of migration, diaspora, and relocation, Specters of the Shore examines the ways in which cultural memory and racial identity have been thematised in the literatures of Black Britain and African America over the course of the past forty years. At the heart of Kamali’s sensitive and illuminating study is a comparative analysis of the representation and treatment of formative or constitutive concepts in these two distinct but inter-related bodies of writing: slavery and exile; Africa and the ideas of ‘return’ and ‘homeland’; rural and urban experience; movement and rootedness. Kamali’s range is wide; her grasp of her material is sure; the result is a work of deep insight, sympathy and imagination.” (Neil Lazarus, Professor of English and Comparative Literary Studies)

“This eloquent and insightful book performs an invaluable service. Its important intervention is anchored in an exhilarating survey of the differences, difficulties and imaginative opportunities which arose from the crisis of identity and belonging that followed the Black Power era. African American and black British writing become connected in an entirely original and provocative way. All the comfortable, easy assumptions of diasporic criticism have been disposed of. In their place, Kamali offers a dynamic, new mapping of key texts, cultural intersections and political movements.” (Paul Gilroy, Professor of American and English Literature, King’s College London)