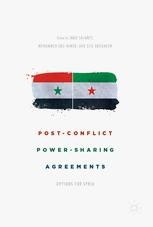 The book surveys comparative power sharing models implemented in societies that have faced identity-conflicts, with attention given to post-conflict design. It analyzes the success and pitfalls of international experiences before proposing a model for Syria. Contributors address the central question: which among the set of power-sharing agreements that have helped settle protracted identity-driven armed conflict can provide Syria with a platform for dialogue, negotiation, and conflict mitigation? The comparative analysis advanced in this book extracts lessons from countries such as Bosnia-Herzegovina, India, Iraq, Lebanon, Mali, Northern Ireland, the Philippines and Sudan. The prospect of a post-conflict distribution of power in Syria is then unraveled from different sectarian, ethnic and regional perspectives. The authors also address challenges of peacebuilding such as violent extremism, gender participation, resettlements, retributions, transitional justice, integration of armed groups and regional and international sponsorship.

​Imad Salamey is Associate Professor of Political Science and the Director of the Institute for Social Justice and Conflict Resolution at the Lebanese American University.
Mohammed Abu-Nimer is Senior Advisor to KAICIID and Professor in the School of International Service at American University, USA.
Elie Abouaoun is Director of Middle East and North Africa Programs at the US Institute of Peace.

“This timely book goes beyond explaining the persistence of the interlocking horrific conflicts in Syria. The diverse contributors provide a variety of well-grounded evidence about strategies   that could end the violence and build a sustainable peace. This book offers hope rather than despair about Syria’s tragedy.” (Louis Kriesberg, Professor Emeritus of Sociology and Maxwell Professor Emeritus of Social Conflict Studies, Syracuse University)

“This excellent collection makes the timely case that the Syrian nation-state—and by implication other ‘failed’ Arab states—can and should be rebuilt from the bottom up rather than the top down, with citizen and identity group empowerment locally and nationally being key to that process. Decision makers involved in rebuilding Arab states would be well advised to heed this sound advice.” (Robert Springborg, Professor of National Security Affairs (ret), Naval Postgraduate School, USA and Non-Resident Fellow, Italian Institute of International Affairs)

“In recommending new forms of state building for Syria, this bold and daring edited volume discredits the idea of the ‘secular,’ state and acknowledges that in the post-Arab uprising era, religious diversity must play a key role in any functioning state. This work also correctly discredits colonial-imposed nationalism associated with the ‘secular’ state,  and emphasizes the important role ethnic and religious identities play in Syria. This idea should not only be adopted in Syria, but in most countries in the region, still ruled by ‘secular’ autocrats who claim incorrectly that they are a better alternative to religiously-influenced forms of governance.” (Geneive Abdo, author of The New Sectarianism: The Arab Uprisings and the Rebirth of the Shia, Sunni Divide)

“Bringing together evidence from international studies with the special features of the Syrian case, this book makes an important contribution to understanding how Syria might get beyond the hurting stalemate and how governance in post-conflict Syria might be constructed. Particularly useful are the debates over the varieties of consociationalism discussions of multi-level power sharing, local truces and ceasefires; and the clash of paradigms between power sharing and retributive justice.” (Raymond Hinnebusch, Director, Centre for Syrian Studies, University of St Andrews, UK)

“This book is a must read for students, scholars, policymakers as well as policy practitioners for its academic rigor and practical policy prescriptions toward resolving the current Syrian crisis through power-sharing. Utilizing the comparative case studies’ approach is very illuminating and innovative.” (Marwa Shalaby, Fellow for the Middle East and Director, Women's Rights in the Middle East Program, Rice University, USA)