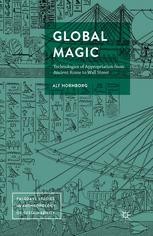 Technologies of Appropriation from Ancient Rome to Wall Street

Modern thought on economics and technology is no less magical than the world views of non-modern peoples. This book reveals how our ideas about growth and progress ignore how money and machines throughout history have been used to exploit less affluent parts of world society. The argument critically explores a middle ground between Marxist political ecology and Actor-Network Theory.

Alf Hornborg is an anthropologist and Professor of Human Ecology at Lund University, Sweden.

“Hornborg’s masterful multidisciplinary synthesis explains how the magic of money conceals power imbalances that result in climate change, environmental degradation, financial crises, poverty and hunger. His ingenious remedy is a new form of money. Must reading for students and everyone apprehensive about our planet.” (Paul Durrenberger, Professor Emeritus of Anthropology, University of Iowa, USA)

“This is an important book about technology, power and everyday magic in the contemporary world. The work of a major anthropological theorist, its synthesis of ecological and economic anthropology addresses some of the pressing challenges for humanity, while its critique of capitalism reveals important truths about unequal exchange, fetishism and the invisible ties between energy and money. Written with erudition and engagement, Hornborg’s book is as readable as it is significant.” (Thomas Hylland Eriksen, Professor of Anthropology, University of Oslo, Norway)

“Sweeping, critical and pointed, Global Magic demonstrates that control of technology coupled to the use of money brings power and riches to some at the cost of the environment and labor of others. Anthropological in scope, the book crosses many disciplinary borders from ecology, to history, to economics as Hornborg illustrates how we live by illusions that hide the theft of time and space from others.” (Stephen Gudeman, Professor of Anthropology, University of Minnesota, USA)

“The unequal exchange that underpins imperialism is disguised by the magic of money and technology, artifacts attributed with social agency. This systematic and original treatise of world history – combining political economy, ecology and anthropology – deserves a wide audience.” (Keith Hart, Centennial Professor of Economic Anthropology, London School of Economics, UK)

“As we have come to expect from Hornborg, this persuasive book challenges perceived wisdom at the highest possible level. He uses classic tools of anthropology and ecology to dig away at the foundation of the monolith of utilitarian economics, explaining how human beings have created such an inequitable and unsustainable system as modern consumer capitalism. It is an important effort to bridge the gap between the logic of capital accumulation and the physical laws and limits that determine the future of our small planet.” (Richard Wilk, Distinguished Professor of Anthropology, Indiana University, USA)