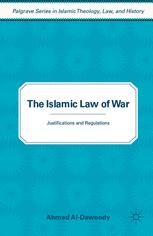 The Islamic Law of War

Al-Dawoody examines the justifications and regulations for going to war in both international and domestic armed conflicts under Islamic law. He studies the various kinds of use of force by both state and non-state actors in order to determine the nature of the Islamic law of war.

AHMED AL-DAWOODY is a Lecturer in the Department of Islamic Studies in English at Al-Azhar University, Egypt.

"This is a highly technical book that will provide answers to many researchers on its dual topics of the Sha'ria position on the resort of the use of force and on the means employed during armed conflict." - Cherif Bassiouni, Distinguished Research Professor of Law Emeritus, President Emeritus, International Human Rights Law Institute, DePaul University College of Law, Chicago, USA.

"With an astute and comprehensive analysis of a 'burdened' subject, Dawoody's book joins a few treatments of the subject in English that do not repackage medieval Christian perceptions of Islam as 'neutral' treatments of the subject of war in Islamic history. It will find its way into most syllabi of college courses on jihad." Ahmad Atif Ahmad, Associate Professor of Religious Studies, the University of California-Santa Barbara, USA.

"...a detailed and nuanced analysis of the Islamic take on the law of war...it contributes to clearing up the current misunderstandings with respect to the Islamic law of war in particular, and with respect to the Islam in general...I would like to reccommend this book to anyone interested in the subject, and specifically to those studying the law of war from a Western perspective." - Hadassa A. Noorda, University of Amsterdam, Journal of Military Ethics

"Ahmed Al-Dawoody has produced a most welcome contribution to the literature of the field, meticulously researched and annotated. His well-constructed analysis turns down the volume of so much shrill rhetoric, and raises hope of breaking the unproductive cycle of blanket condemnations of Islam and Muslims. His study will reward the patient reader with a painstaking deconstruction of numerous unjust misconceptions." - G. John Renard, Professor of Theological Studies, Saint Louis University, USA

'A highly useful guide to Islamic precepts on the initiation of armed conflict and the conduct of belligerents once a war has begun, Al-Dawoody's book shows Islamic law as a source for, and consistent with much of what the international community accepts as the contemporary law of war.' John Quigley, President's Club Professor Emeritus of Law, Ohio State University, USA

'This is a very authoritative book on Jihad in recent years. Al-Dawoody not only sheds light on Jihad, its justification and the rules of qital (combat), he also addresses common misconceptions about Jihad.' - Niaz A Shah, University of Hull, UK