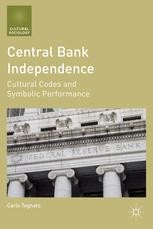 By engaging in an ethnography of the social text of German, European and USA monetary affairs, this book introduces a new analytical framework that will enable practitioners and academics, particularly within sociology, economics, political economy, and political science, to gain a clear understanding of the role of culture in central banking.

'In his book Tognato suggests that, to better understand how central banks operate, we must also take culture into account, in the form of symbols, rituals, national values and more. The result is a very intelligent and creative book, which will hopefully be read not only by economists and other social scientists but also by central bankers.' - Richard Swedberg, professor of Sociology, Cornell University

"As Europe has careened through crises, the powers of its central bank and the desirability of its unified currency have come under question. Can the euro and the European Central Bank survive? For answers and for a thoughtful rebuke of conventional wisdom, you must read this book. Tognato exposes the symbolic dimensions of money, the dramatic performances of central bankers, and the cultural dynamics of international markets. These ideas are worth grappling with in a time when our old ideas have failed us." - Frederick F. Wherry, associate professor of Sociology, Columbia University, and author of The Culture of Markets

'With his study of stability cultures Tognato boldly goes where no economist has gone before. After decades of depoliticization of monetary policy and central bank autonomy, the future may bring repoliticization and political accommodation. Once we understand, with the help of Tognato, how stability cultures enabled central bank independence in the first place, we are forewarned as to how Europe's cultural malaise might lead to its unraveling.' - Susanne Lohmann, professor of Political Science and Public Policy and Director, Center for Governance University of California, Los Angeles

'Tognato shows well why we can not leave the study of money to economists. Money has not just economic meaning but also deep political and cultural significance. His analysis of the importance of stability cultures for the legitimacy and functioning of central banks is both fascinating and extremely timely for anyone interested in the political management of modern money.' - Eric Helleiner, CIGI Chair in International Political Economy, University of Waterloo, Canada