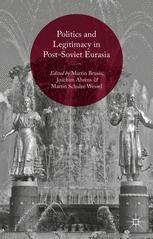 Politics and Legitimacy in Post-Soviet Eurasia

Political legitimacy has become a scarce resource in Russia and other post-Soviet states. Their capacity to deliver prosperity has suffered from economic crisis, war in Ukraine and confrontation with the West. Will nationalism and repression enable political regimes to survive? This book studies the politics of legitimation in Post-Soviet Eurasia.

“It is quite rare to find an academic publication of the same analytical depth and theoretical insight as Brusis, Ahrens, and Wessel’s edited volume. The book presents a great selection of theoretical and empirical contributions focusing on a variety of issues in the former Soviet republics.” (Aijan Sharshenova, Journal of Soviet and Post-Soviet Politics and Society, Vol. 3 (1), 2017)

“The volume consists of 10 chapters focusing on different geographical areas of post-Soviet Eurasia (PSE) that range substantively from the evaluation of party systems, political economy to national discourses, patriotic education, court systems, literature and memory politics, … the book will be of a great interest for postgraduate students and scholars in a variety of fields and will hopefully serve as a good basis for further detailed and comparative studies on legitimacy in democratic and non-democratic states.” ( Diana T. Kudaibergenova, Democratization, Vol. 25 (2), September, 2016)

“This edited volume of ten articles provides an in-depth look at various facets of the concept of institutional legitimacy, as it pertains to the states of post-Soviet Eurasia. The book’s interdisciplinary nature provides a wide scope in a variety of case studies, showcasing the different levels of interaction within the Eurasian regimes. … It is an important resource for the study of legitimacy, especially as many of the regimes under study currently find themselves in crisis.” (Mark Teramae, Europe-Asia Studies, Vol. 68 (9), 2016)

'Brusis, Ahrens and Wessel have assembled a stimulating collection of studies on political legitimation in the CIS. The chapters combine a variety of perspectives and case studies on the challenges regimes face after the economic crises of 2008-10 and the Crimean crisis of 2014. Many chapters are important stand-alone studies.' Richard Pomfret, University of Adelaide, Australia, and The Johns Hopkins University, Bologna, Italy

'This is the remarkable outcome of an inter-disciplinary research network touching upon the fundamentals of Eurasian post-communist states: the different aspects of their politics of legitimation and legitimacy. The volume will be a leading scientific tool for international scholars of post-Soviet countries and their realities.' Jutta Scherrer, Professor of Russian History, L'École des hautes études en sciences sociales, Paris, France

'This inter-disciplinary collection explores the legitimation strategies adopted by ruling elites in post-soviet Eurasia. Combining a Weberian conceptual framework with detailed country case studies, this will be a valuable addition to the debate over the political stability of the post-soviet states in the face of widespread corruption and sluggish economic performance.' Peter Rutland, Professor of Government, Wesleyan University, Middletown, Connecticut, USA