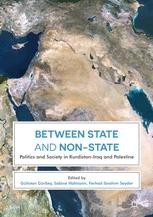 Between State and Non-State

Politics and Society in Kurdistan-Iraq and Palestine

This edited volume compares the internal dimension, politics and society in Kurdistan-Iraq and Palestine. In particular, it focuses on internal processes in Kurdistan-Iraq and Palestine (Palestinian Territory of the West Bank and Gaza Strip) in their specific shaping, development and transformation. The contributing authors analyze the transformation processes of the internal power structures, the economic basics, and the civil societies and provide an overview of the current political, economic and societal situation and challenges in both regions.  The book presents the similarities and differences between both de facto states with regard to a set of guidelines: legitimacy, power relations, transformation of politics and society. It provides empirical explanations and contributes to a better understanding of both de facto states.


Ferhad Ibrahim Seyder is Professor of Political Science at the Center for Kurdish Studies, University of Erfurt, Germany.

“Travelers among Palestinians and Kurds from Iraq quickly  learn that they rarely empathize with one other, because the maxim that intensely applies here is that 'they are the friends of our enemies.'  This pathbreaking  collection demonstrates, however,  just how much  the citizens of these quasi-recognized polities have common experiences, including contested national self-determination claims, internal party and spatial divisions, geopolitical constraints, and pan-ethnic linkages. Their histories differ, of course, but in more  instructive ways than is often suggested. This pioneering endeavor takes many useful comparative steps beyond ethnocentric introspection and collective self-pity.” (Brendan O’Leary, Lauder Professor of Political Science, University of Pennsylvania)

“This is a very welcome addition to the comparison of two quasi states, The Kurdistan Regional Government (KRG) and Palestine. They both represent interesting cases in the international political system; both enjoy a modicum of recognition (Palestine more so than the KRG), financial autonomy (the KRG more so than Palestine) and both are far more consequential in international affairs than their status would suggest. This comparison, the first of its kind, makes for an interesting volume for scholars of the region and beyond.” (Henri J. Barkey, Director of the Middle East Program at the Woodrow Wilson International Center for Scholars. He is the former Bernard L. and Bertha F. Cohen Professor at Lehigh University)

“This is an important volume, which advances our knowledge of the internal dynamics of de facto states. The editors have brought together an eclectic mix of authors who offer insights on the genesis and historical transformation of the political and socio-economic processes in Kurdistan-Iraq and Palestine. A must-read for all those who wish to understand the fundamentals, how these have affected institution and state-building dynamics as well as the current challenges in both regions.” (Dimitris Bouris, University of Amsterdam. Dimitris Bouris and Tobias Schumacher (eds.) (2017), The Revised European Neighbourhood Policy: Continuity and Change in EU Foreign Policy, Palgrave Macmillan)

“This volume is the first of its kind to systematically bring together essays by prominent scholars exploring the Kurdish Iraqi and Palestinian experiences in parallel. It makes a valuable contribution to our understanding of the challenges and characteristics of these two ‘de facto states.’ The volume provides a comprehensive overview and comparative analysis that will be of considerable benefit to policy analysts and professionals dealing with Iraqi Kurdistan, Palestine and the wider region.” (Markus E. Bouillon, author of The Peace Business  and  Iraq: Preventing a New Generation of Conflict)

“This path breaking work fills a real lacuna in the literature: a comparative analysis of the de facto states of Kurdistan and Palestine. In a region where the very concept of unified nation states is being challenged by conflict and civil war, might the 'no state solution' that has characterized Palestinian and Kurdish political life in the past two decades herald something new for Middle Eastern politics? This sophisticated study probes this fascinating scenario.” (Michael R. Fischbach, Randolph-Macon College, U.S.A. Author of Records of Dispossession: Palestinian Refugee Property and the Arab-Israeli Conflict (2013))

“This book offers a parallel exploration of two of the most explosive legacies of the 1916 Sykes-Picot agreement to carve up the Middle East: the Kurdish question and the Palestinian question. Beyond its comparative purpose, it provides excellent insights into each of the Kurdish regional government in Iraq and the Palestinian Authority in the West Bank.” (Gilbert Achcar, Professor at SOAS, University of London and Chair of the SOAS Centre for Palestine Studies)

“A ground-breaking book that, for the first time, compares the two stateless nations behind so many of the Middle East's conflicts over the past century.  Leading scholars of Palestine and Kurdistan compare notes on society and politics and state-building initiatives.  Essential reading for scholars and policy makers alike.” (Eugene Rogan, University of Oxford. Author of The Fall of the Ottomans: The Great War in the Middle East, 1914-1920, New York and London: Basic Books and Penguin, 2015)

“This insightful, theoretically informed volume gives a sober assessment of the evolution of the political and economic systems in Palestine and the Kurdish autonomous areas. The parallels, and differences, between the two regions are illuminated in empirically rich chapters that make a substantial contribution to the literature.” (Matteo Legrenzi, Associate Professor, Ca’ Foscari University of Venice and President of the Italian Association for Middle Eastern Studies (SeSaMO))