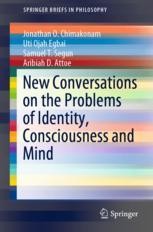 New Conversations on the Problems of Identity, Consciousness and Mind

This book introduces concepts in philosophy of mind and neurophilosophy. Inside, three scholars offer approaches to the problems of identity, consciousness, and the mind. In the process, they open new vistas for thought and raise fresh controversies to some of the oldest problems in philosophy.

The first chapter focuses on the identity problem. The author employs an explanatory model he christened sense-phenomenalism to defend the thesis that personal identity is something or a phenomenon that pertains to the observable/perceptible aspect of the human person.

The last chapter addresses the mind/body problem. It adopts the new concept proto-phenomenalism as an alternative explanatory model. This model eliminates the idea of a mind. As such, it approaches the mind-body problem from a materialistic point of view with many implications such as, the meaning(lessness) of our existence, the possibility of thought engineering as well as religious implications.

Jonathan O. Chimakonam Ph.D, is a Senior Lecturer at the University of Calabar and University of Pretoria and a Research Associate at the University of Johannesburg. His teaching and research interests include: African Philosophy, Philosophy of Mind, Logic, Feminism, Environmental Ethics, African feminist thoughts, and Postmodern thought. He aims to break new grounds in African philosophy and Systems of Thought. He has supervised several master’s and doctoral thesis including in the area of philosophy of mind. His articles have appeared in journals such as Ultimate Reality and Meaning, Journal of Global Ethics, Confluence, South African Journal of Philosophy, Thought and Practice, Dialogue: Canadian Philosophical Review, African Studies Quarterly, Ufahamu, Online Journal of Health Ethics, Journal of Pan African Studies, Phronimon, Polylog, Filosofia Theoretica, Dialogue and Universalism, Journal of World Philosophies, Acta Academica, etc. He is author and editor of some books including the award winning Existence and Consolation: Reinventing Ontology, Gnosis and Values in African Philosophy (by Ada Agada), Minnesota: Paragon House, 2015 (CHOICE Outstanding Academic Title Award, 2015); Atuolu Omalu: Some Unanswered Questions in Contemporary African Philosophy (New York Lanham: University Press of America, 2015); African Philosophy and Environmental Conservation (London: Routledge, 2018); African Philosophy and the Epistemic Marginalisation of Women (London: Routledge, 2018, with Louise du Toit); African Philosophy in the Post Modern Era (Delaware: Vernon Press, 2018, with Edwin Etieyibo); The Death Penalty from an African Perspective…(Delaware: Vernon Press, 2017, with Fainos Mangena). He has many book chapters. He is the convener of the professional African philosophy body, The Conversational School of Philosophy (CSP) and the founding editor of Filosofia Theoretica: Journal of African Philosophy, Culture and Religions. He is winner of Jens Jacobsen Research Award for Outstanding Research in Philosophy by the International Society for Universal Dialogue. He is African philosophy Area Editor in the Internet Encyclopedia of Philosophy. He propounded the theories of Conversational thinking and Ezumezu Logic. He is Postgraduate and Undergraduate External Examiner to University of the Witwatersrand, University of Pretoria and University of KwaZulu-Natal in South Africa. He is external Researcher Assessor for South Africa’s National Research Foundation. He is currently collaborating on a manuscript on Conversations between Chinese and African Philosophies with Prof. Keqian Xu of Nanjing Normal University, China. He has in-the-press collaboration with Prof. Uduma O. Uduma on African Philosophy and Feminism; as well as other collaborations with colleagues. Chimakonam is a member of nearly a dozen professional bodies and has given several international conference lectures.

Egbai Uti Ojah, Ph.D, is a Senior Lecturer at the Department of Philosophy, University of Calabar, His teaching and research interests include: Philosophy of Science, African Philosophy and Feminism. Currently, he is the Director of the Centre for General Studies, University of Calabar. He aims to break new grounds in African philosophy, specifically in the areas of conversational philosophy and African feminist thought. Egbai has published in learned journals and has given lectures at different international conferences.

Samuel T. Segun is a doctoral candidate at the Department of Philosophy, University of Johannesburg. His research interests include the philosophy of artificial intelligence, philosophy of mind especially neurophilosophy and consciousness, business ethics and African intellectual development. Samuel’s doctoral research focuses on developing a robust ethical theory for autonomous intelligent systems that is informed by African values and rivals Western approaches.

He is an affiliate member of the Philosophy Node of the Centre for Artificial Intelligence Research (CAIR) at the University of Pretoria, a member and research fellow of the Conversational School of Philosophy (CSP), and a member of the IEEE’s (Institute of Electrical and Electronics Engineers) Standards Association Global Initiative for Ethical Considerations in the Design of Autonomous Systems.