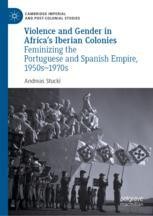 This book examines how and why Portugal and Spain increasingly engaged with women in their African colonies in the crucial period from the 1950s to the 1970s. It explores the rhetoric of benevolent Iberian colonialism, gendered Westernization, and development for African women as well as actual imperial practices – from forced resettlement to sexual exploitation to promoting domestic skills. Focusing on Angola, Mozambique, Western Sahara, and Equatorial Guinea, the author mines newly available and neglected documents, including sources from Portuguese and Spanish women’s organizations overseas. They offer insights into how African women perceived and responded to their assigned roles within an elite that was meant to preserve the empires and stabilize Afro-Iberian ties. The book also retraces parallels and differences between imperial strategies regarding women and the notions of African anticolonial movements about what women should contribute to the struggle for independence and the creation of new nation-states.

“Stucki … delivers a much-welcome addition to a growing field of decolonial thought and feminist critique of Portuguese- and Spanish-speaking histories and cultures. Violence and Gender in Africa’s Iberian Colonies offers an enlightening retelling of a history often remembered in its most brutal and exuberant forms—the fight for independence and self-determination in Africa, the regimes of Franco and Salazar, and the bloody and prolonged wars fought by the Portuguese fascist state to retain their colonial territories at all costs.” (Daniel da Silva, Journal of Lusophone Studies, Vol. 5 (1), 2020)

“Andreas Stucki’s book Violence and Gender in Africa’s Iberian Colonies is a valuable and innovative addition to an established corpus of scholarship on the gendered nature of colonialism, as well as to the small but rapidly expanding historiography on the Iberian colonies in Africa. With accessible and lively prose, as well as striking details about the lives of individual women affected by colonization, the book is immensely readable.” (Joanna Allan, Journal of Spanish Cultural Studies, November 12, 2020)

“This is a fundamental volume for those who want to delve further into a comparative history of late colonialism, with gender as its core axis.” (José Pedro Monteiro, e-journal of Portuguese History, Vol. 17 (2), December, 2019)

“Andreas Stucki offers an excellent scholarly contribution to the field. This is an original and innovative book, based on solid empirical research and fresh archival material about two relatively understudied cases: the Portuguese and Spanish ‘late’ colonialisms in Africa. It is well-structured and well-argued, dialoguing with the existing literature in a rigorous and fruitful way. The focus on gender dynamics and on the intersections between these and the ‘late’ colonial ‘modernizing efforts’ of both imperial formations is patently ground-breaking, opening many avenues for future research.” (Miguel Bandeira Jerónimo, Center for Social Studies, University of Coimbra, Portugal)