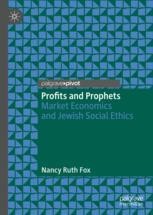 Nancy Ruth Fox is Associate Professor in the Department of Economics at Saint Joseph's University, USA.

“Economics emphasizes the ‘me.’ Judaism, not unlike Christianity, emphasizes the ‘we.’ You might think the two perspectives are always at loggerheads, which they sometimes are. But Fox’s beautifully written little book points out important places where Judaism and economics mesh. As a Jewish economist, I was glad to learn of my errors!” (Alan S. Blinder, Gordon S. Rentschler Memorial Professor of Economics and Public Affairs, Princeton University)
“As an economist who integrates the Catholic Social Tradition into my teaching and research, I encourage others interested in economic justice questions to read this work in order to gain a deeper understanding the Jewish Social Justice tradition and its applicability to contemporary questions, such as income inequality, environmental protection, and immigration.” (Margarita M. Rose, Professor of Economics, King's College)
“Hirschfeld's Aquinas and the Market and Tanner's Christianity and the New Spirit of Capitalism have notably advanced critical reflection on the constructive relations between religious ethics and economics. Now in Profits and Prophets, Fox offers her own fine contribution. Mining the rich resources of Jewish traditions and drawing on her own professional expertise as an economist, Fox discusses such timely topics as immigration policy, the minimum wage, environmental damage, and usury (read payday loans) with clarity and insight.” (William Werpehowski, McDevitt Professor of Catholic Theology, Georgetown University)
“For those seeking to address current economic policy issues by drawing on the Jewish social ethics tradition, Profits and Prophets offers a cogent way forward. It provides an attractive entry into modern economic thinking on the social benefits and possible costs of market-based policies, while recognizing and discussing the complexities of contrasting market norms with the end values of Jewish social teaching. This book will advance current scholarship in the arena of Jewish social ethics applied to economic policy challenges such as immigration, climate change, and payday lending.” (Edd Noell, Professor of Economics, Westmont College)
“This book is meticulously researched and passionately argued. We live in a time when more and more people are demanding of historic faith traditions a moral compass on how we can create a more compassionate and just world. Fox does that admirably on behalf of the Jewish tradition in this book.” (Rabbi Sid Schwarz, Senior Fellow, Hazon: The Jewish Lab for Sustainability)