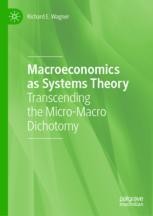 This book examines macroeconomic theory from an analytical framework provided by theories of complex systems, in contrast to conventional theories founded on aggregation. The resulting difference in analytical perspectives is huge: the macro level of society is not pursued through aggregation over micro entities. To the contrary, the micro-macro relation is treated as one of parts-to-whole, and this relation is approached from within an ecological scheme of thought. A society is a complex ecology of plans. That ecology, however, is not reducible to a single plan.

Conventional macro theory presents a national economy as a collection of such aggregate variables as output, employment, investment, and a price level, and seeks to develop theoretical relationships among those variables. In contrast, the social-theoretic approach to macro or social theory in this book treats the standard macro variables as having been shaped through social institutions, conventions, and processes that in turn are generated through interaction among economizing persons. The object denoted as macro is thus of a higher order of complexity than the object denoted as micro.
Show all
About the authors

Richard E. Wagner is Holbert L. Harris Professor of Economics at George Mason University, USA. He has authored about 30 books and monographs and 200 journal articles across a diverse spectrum of subjects in economic theory and political economy. He was the founding co-editor of Constitutional Political Economy from 1989-1997, and he is currently a member of the editorial boards of Constitutional Political Economy, the Journal of Public Finance and Public Choice, the Journal of Infrastructure, Policy, and Development, and the Review of Austrian Economics.

“Wagner brings the complexity revolution to macroeconomics, which has side-stepped it until now. We have not known how to do complexity macroeconomics, but with this important book Wagner has shown us the way. Key is the synthesis of process and structure. Fresh entrepreneurial dreams jostle together in a common institutional framework that constrains and shapes the resulting turbulent flow of economic life. Wagner’s theory enables us to use complexity tools to work out the macroeconomic consequences of this microeconomic jostling. A macroeconomics revolution is nigh.” (Roger Koppl, Professor Finance, Syracuse University)

“This book is an important contribution to the debate on the nature and scope of macroeconomic analysis. Wagner warns us against questionable attempts to aggregate, measure and draw doubtful recipes for policy-making. Instead, he sticks to his subjectivist guns, bridges the gap between micro- and macroeconomics, and offers new insights into the role of institutions. Wagner deserves praise for this impressive scholarly achievement. While developing a literature that began with the Scottish Enlightenment, his pages provide path-breaking ideas that will capture the attention of the professional economist and fascinate those who believe it is high time we start thinking out of the orthodox box.” (Enrico Colombatto, Professor of Economics, University of Turin)