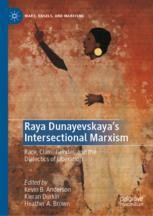 Race, Class, Gender, and the Dialectics of Liberation

Raya Dunayevskaya is one of the twentieth century’s great but underappreciated Marxist and feminist thinkers. Her unique philosophy and practice of Marxist-Humanism—as well as her grasp of Hegelian dialectics and the deep humanism that informs Marx’s thought—has much to teach us today. From her account of state capitalism (part of her socio-economic critique of Stalinism, fascism, and the welfare state), to her writings on Rosa Luxemburg, Black and women’s liberation, and labor, we are offered indispensable resources for navigating the perils of sexism, racism, capitalism, and authoritarianism. This collection of essays, from a diverse group of writers, brings to life Dunayevskaya’s important contributions. Revisiting her rich legacy, the contributors to this volume engage with her resolute Marxist-Humanist focus and her penetrating dialectics of liberation that is connected to Black, labor, and women’s liberation and to struggles over alienation and exploitation the world over. Dunayevskaya’s Marxist-Humanism is recovered for the twenty-first century and turned, as it was with Dunayevskaya herself, to face the multiple alienations and de-humanizations of social life.

Kevin B. Anderson is Professor of Sociology, Political Science and Feminist Studies at University of California, Santa Barbara, USA. His previous books include Lenin, Hegel, and Western Marxism (1995), Foucault and the Iranian Revolution (with Janet Afary, 2005), and Marx at the Margins (2010/2016).
Kieran Durkin is Marie Skłodowska-Curie Global Fellow at University of York, UK and has been a Visiting Scholar at University of California Santa Barbara, where he studied the Humanist Marxist tradition. He is author of The Radical Humanism of Erich Fromm (2014) and  Erich Fromm’s Critical Theory (co-edited with Joan Braune, 2020).
Heather A. Brown is an Associate Professor of Political Science at Westfield State University, USA. She has written widely on Marxism, feminism, and ecology and is the author of Marx on Gender and the Family: A Critical Study (2012).

“This is an important collection of essays appraising the legacy of an underappreciated Marxist philosopher, Raya Dunayevskaya. Perhaps her underappreciation was rooted in the philosopher’s own gender, or perhaps in her stunning recasting of Marxism itself through an early and avid commitment to frameworks of gender and race. Now as mass antiracist protests redefine the horizons of human freedom on our streets, Raya Dunayevskaya’s writing can do the work it was always meant to do, provide a theoretical grounding to the cry for freedom of the oppressed.

“The essays in this collection explore Raya Dunayevskaya’s revolutionary humanism, which extends class analysis to race, gender, and other dimensions of dominance, and insists that theory does not stand above practice but shapes and is shaped by the experience of liberatory social movements. Dunayevskaya’s work highlights and develops the humanism at the center of Marx’s thought and makes Marx relevant to our time.”

—Barbara Epstein, Professor of the History of Consciousness Studies, University of California, Santa Cruz, USA, and author of Political Power and Cultural Revolution (1993)

“Too many intellectuals fail to see that dialectical studies and innovations on revolutionary practice is not exclusively men’s work. As ideas of women ranging from those of Rosa Luxemburg, Emma Goldman, and He-Yin Zhen to Grace Lee Boggs have been receiving increased attention, it is clear that their critical challenge is to think human transformation and flourishing through what everyone has to offer. Kevin B. Anderson, Kieran Durkin, and Heather A. Brown, and the community of scholars they assembled to explore the thought of Raya Dunayevskaya make it clear that her ideas were no less than revolutionary. Offering analyses beyond the reductionism of class versus race and gender, the humanistic logic of both-and and openness is brought forth with breathtaking clarity. This book pays proper respect to the ideas of this great revolutionary thinker through pushing aside fetish and ushering forth, through eyes wide open to contemporary pandemics and uprisings, the ongoing power and beauty of living thought.”

“Raya Dunayevskaya’s Intersectional Marxism truly addresses Race, Gender, Class and the Dialectics of Liberation, and the excellent book edited by Kevin B. Anderson, Kieran Durkin, and Heather A. Brown demonstrates the relevancy of Dunayesvskaya’s work for this era of crisis and tumultuous struggle and upheaval. The book engages both scholars and activists, and demonstrates how revolutionary theory can become a weapon of transformational practice.”

—Douglas Kellner, Distinguished Professor, UCLA, USA and author of Herbert Marcuse and the Crisis of Marxism (1984)

“Periodically the world is in flames and those who would topple not just statues but the whole exploitative order begin to dream again of what might be. New times overlay on old ones. Raya Dunayevskaya’s remarkable achievement is to be in her time and outside of it—to see so clearly, practically, philosophically, what steers the world, and to see what is suppressed within this, what distorts and what is emergent, ready to activate another time and be activated once new times constellate. Dunayevskaya imagines and works towards times to come—but also anticipates a faceting of Marxism to account for the many-threaded nature of the present world, with its skirmishes around multiple points of oppression and social division. Dunayevskaya’s analyses relays, agilely, between the pressure points of class, race, sex, gender, the discordant effects of colonialism, war and nationalism, but they stand also, insistently, at the intersection of philosophy and politics, transforming and elaborating each in the process. So persuasive are her accounts of Marxist Humanism, one wonders how any Marxism could shed such a qualifier that makes all sense of the project. This volume appraises not just a legacy but the potential for current and future liberatory struggles, grounded by philosophical rigour and oriented towards a practical sense of a limitless creativity.”

“At such a turbulent historical moment in which armed white militia cosplay their favorite action stars on the steps of our statehouses, and Nazi ideology is disinterred from the blood-stained soil of history, Raya Dunayevskaya’s Intersectional Marxism could not come at a more urgent time, offering revolutionary praxis informed by intersectionality as means of shifting the tectonic plates of our contemporary political landscape. Rejecting the tepid liberalism claiming the mantle of democracy as incapable of providing an answer to the rise of neofascism, this outstanding collection of essays offers lucid and provocative Marxist-Humanist interpretations of the contemporary political scene, emphasizing the intersectional experiences of people of color and recognizing that these experiences, marked by systems of mediation linked to race, gender, colonialism, class and globalization, when placed against the backdrop of the movement towards freedom from oppression, are always lived in ways that make them greater than the sum of their parts.”

—Peter McLaren, author of Che Guevara, Paulo Freire, and the Pedagogy of Revolution (1999)