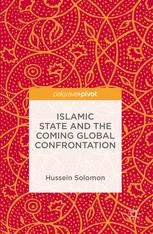 This book analyzes the origins and organizational structure of Islamic State (IS), examining its military triumphs and success in securing new recruits via social media. From its base in Iraq and Syria, IS has spread globally with 17 regional affiliates from Indonesia to Nigeria and sleeper cells in at least 60 countries, capable of atrocities like the Paris attack. To understand the threat of IS, this book explores its organizational structure and underlying ideology, and implications for Western efforts to attack the leadership of IS. The ways IS has grown by swiftly adapting its military strategy, developing creative forms of funding and efforts to win hearts and minds of locals are identified. The author highlights how the competing individual national interests between the Western military alliance and local partners have served to strengthen IS. With its ideology spreading ever further, this book warns of the looming violent confrontation between democratic and Islamist forces. This volume speaks to academics in international relations, security studies and strategic studies, policy-makers and interested parties.

Hussein Solomon is Professor in the Department of Political Studies and Governance at the University of the Free State, South Africa and is a Senior Research Associate of the Israeli-based Research on Islam and Muslims in Africa (RIMA). His most recent book was entitled Terrorism and Counter-Terrorism: Fighting Insurgency from Al Shabaab, Ansar Dine and Boko Haram (Palgrave Macmillan, 2015).

“Professor Solomon’s examination of the evolution of the Islamic State from jihadist terrorist organization to a modern-day terrorist state—controlling territory, governing, and operating an economy—moves beyond mere semantics to challenge long-held beliefs about the nature of terrorism and counter-terrorism in the 21st century.  By better understanding the roots of the Islamic State’s power, popular appeal, and strategy and tactics, one gains a fuller appreciation of the actual threat it poses to global security.  Moreover, Solomon’s insightful analysis of the State’s vulnerabilities provides a powerful template for developing more targeted and effective counter-terrorism tactics and strategies in the future.” (Stephen A. Emerson, Former Security Studies Chair, Africa Center for Strategic Studies, Washington, DC, US)

“There are few better placed than Hussein Solomon to analyse the implications of Islamic State, and fewer still with his courage and integrity. Read this book, and learn.” (Dr. Greg Mills, Director of the Brenthurst Foundation, Johannesburg, South Afric)

“Empirically solid and historically grounded, Islamic State and the Coming Global Confrontation works through the maze of ethnic, religious, economic, ideological and political interests with an analytical precision and fluency of writing that puts on the table reasoned positions that warn of the possibilities and constraints of resolving conflict in a context where the competing interests of Russia and the West tend to make things worse.” (Professor Jonathan Jansen, Vice Chancellor and Rector of the University of the Free State, South Africa)

“Hussein Solomon has provided an original and useful study of the Islamic State, which explains very vividly the reasons for its success, and based on that, the comprehensive measures which should be taken in order to effectively fight against it and its ideology. It is a must read book for decision makers, scholars, researchers and the general public.” (Dr. Moshe Terdiman, Director, Research on Islam and Muslims in Africa)

“Hussein Solomon continues to display the ability to transcend the boundary between that of academic and practitioner. He succeeds to objectively analyse and demystify this much debated and little understood phenomenon. Hussein challenges and guides governments, policy makers, securocrats and the business community with a viable, comprehensive  - though long term - approach to successfully address this burning issue.” (Major General (Retired) Les Rudman)

“This book is a scholarly, stark and timely warning about the Islamic State and its global appeal, reach and menace. Hussein Solomon cautions against underestimation or dismissing it as an unIslamic and anti-Islamic phenomenon but demands recognising its Islamic roots and appeal … while military response would scale down its presence, he persuasively argues for a global and inclusive political response to reduce its transnational appeal and attraction for youth.” (PR Kumaraswamy, Professor of Middle Eastern Studies in Jawaharlal Nehru University, New Delhi, India)