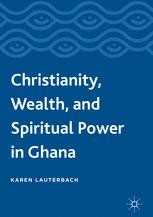 This book centers around mid-level charismatic pastors in Ghana. Karen Lauterbach analyzes pastorship as a pathway to becoming small “big men” and achieving status, wealth, and power in the country. The volume investigates both the social processes of becoming a pastor and the spiritual dimensions of how power and wealth are conceptualized, achieved, and legitimized in the particular context of Asante in Ghana. Lauterbach integrates her analysis of charismatic Christianity with a historically informed examination of social mobility—how people in subordinate positions seek to join up with power. She explores how the ideas and experiences surrounding the achievement of wealth and performance of power are shaped and re-shaped. In this way, the book historicizes current expressions of charismatic Christianity in Ghana while also bringing the role of religion and belief to bear on our understanding of wealth and power as they function more broadly in African societies.

Karen Lauterbach is Associate Professor at the Centre of African Studies, University of Copenhagen, Denmark.

“By contributing this significant case study to a wider literature on Christian practice across Africa – and, indeed, the anthropology of Christianity – Lauterbach also illuminates an important dynamic in the spread of charismatic Christianity beyond Africa. … Lauterbach’s book will appeal not only to scholars and students of Africa and African Christianity but also to those interested in global or extra-European Christianity. … this book is required reading for scholars interested in the day-to-day lives, ambitions and experiences of African Christians.” (Insa Nolte, Africa, Vol. 88 (4), 2018)
“Lauterbach’s Christianity, Wealth, and Spiritual Power in Ghana, provides us with a refreshing look at what has been described as Ghana’s ‘new Christianity.’ … it certainly does not shy away from foregrounding why Kumasi and Asante notions of wealth, power and status are essential to our understanding of charismatic Christianity in Ghana. … Karen Lauterbach’s book carefully considers how both historical and cultural continuity as well as Christian discontinuity matter.” (Girish Daswani, anthrocybib, blogs.hss.ed.ac.uk, July, 2017)

“This book is a serious addition to work on Asante. It is also one of the most insightful studies available of modern African belief within a documented historical and cultural framework. It is highly rewarding in its own right, and richly suggestive for all those interested in the past and present of Africa.” (T.C. McCaskie,  University of Birmingham, UK)

“Theoretically insightful, empirically rich, methodologically sound, and clearly articulated. Lauterbach’s study provides an important contribution to scholarship on religion in Africa by developing a new framework for explaining the work and careers of young pastors in Asante, Ghana.  She has written an agenda-setting piece for the study of the new charismatic movements in Africa and her findings are bound to be of interest to scholars of religion, public authorities and the reading public.” (George Bob-Milliar, Kwame Nkrumah University of Science & Technology, Ghana)

“Karen Lauterbach’s ethnography is creative and innovative on several levels because Lauterbach takes the reader on a journey through a dynamic religious field, demonstrating how religious operatives draw from indigenous and Christian discursive practices to imagine a world and the kind of leadership and ecclesial community necessary to make that world possible. It is spiritual and social world in which apprenticeship and mentorship is valued, sought, and given. At the center of this narrative is the calling and art of pastorship in a cultural and spiritual landscape where successful leadership and becoming a “big man” is valued. This is a fascinating ethnography of the daily lives of the many unsung spiritual leaders at the center of the Pentecostal explosion in Africa and the African diaspora.” (Elias Kifon Bongmba, Rice University, USA)