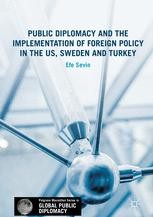 Public Diplomacy and the Implementation of Foreign Policy in the US, Sweden and Turkey

Efe Sevin is Post-Doctoral Researcher at the Faculty of Economic and Social Sciences of the University of Fribourg, Switzerland. His current research focuses on the role of nation brands and public diplomacy on achieving foreign policy objectives. Dr. Sevin received his Ph.D. from American University's School of International Service, Washington, DC, USA.

“Efe Sevin’s comparative study of public diplomacy is timely and insightful. While public diplomacy is seen as central to 21st century statecraft, it remains remarkably lumpen in theoretical development and application. Especially productive is Sevin’s seamless weaving of theory and practice, making substantive contributions to the episteme of public diplomacy practice, as well as a framework for future research. This is a must read for international communication scholars and students alike.” (Shawn Powers, Executive Director, Advisory Commission on Public Diplomacy, US Department of State)

“Efe Sevin provides a valuable comparative study of European and American public diplomacy practices that will prove vital for scholars and practitioners. His approach shows, for public diplomacy it is crucial to take the political environment into consideration, especially in times when nationalists and populism are on the rise. These challenges can only be addressed by moving beyond disciplinary boundaries.” (Diana Ingenhoff, Professor of Organizational Communication, University of Fribourg, Switzerland)