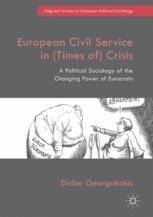 A Political Sociology of the Changing Power of Eurocrats

This book, part of the new wave of political sociology in EU studies, examines the dialectics of construction/deconstruction of the European civil service through a succession of empirically grounded case studies. Breaking with the usual representations of ‘Eurocrats’, it sheds light on a hidden aspect of the current European crisis: a crisis of social reproduction which affects the European civil service in a heavy context of management reforms, enlargements, institutional changes and the euro crisis. This in turn has a number of consequences in terms of internal tensions, power, and more broadly, the capacity of EU institutions to create convergence between diverging national and economic interests, and to embody a European future.

European Civil Service in (Times of) Crisis will be of interest to students and scholars across a wide range of disciplines, including politics, sociology and public administration, to practitioners working in and with the EU institutions, as well as those wishing to know more about the EU.

Didier Georgakakis is Professor of Political Science at the University of Paris 1 Panthéon-Sorbonne, France and Visiting Professor at the College of Europe, Belgium. He is co-editor of The Field of Eurocracy (Palgrave, 2013).

“Didier Georgakakis’ study of the EU civil service elegantly dismantles polemical notions about “Brussels bureaucrats” and social science claims that bureaucrats are everywhere similar. He describes how EU civil servants formed themselves and were formed historically to “build Europe”. Recently they have been deconstructed and redefined to assist in managing globalizing neo-liberalism, however. Theoretically and methodologically, this excellent book reminds us that French political sociology has much to teach us how to understand today’s world.” (George Ross, Université de Montréal, Canada)

“While there is ample research on most of the institutions of the European Union, the civil service, i.e. the staff of the European Commission, has been under-studied, in spite of their crucial role. This book helps to redress the balance.  It makes available in English the important work of Didier Georgakakis, who gives us a comprehensive view, integrating ethnographic observation with sociological theory, of the many challenges that have reshaped the European civil service and threatened its core values.” (Carolyn Ban, University of Pittsburgh, USA)

“There is little research on international officials, but this book shows what the civil servants of the European Union do, who they are and how their work is organized. It also reveals the managerial reform that has been going on since the late 1990s, with far from positive effects: an instructive and alarming book.” (Bob Reinalda, Radboud University Nijmegen, the Netherlands)

“Didier Georgakakis' new monograph makes a major contribution to our understanding of the EU civil service and also sheds light on a so-far unacknowledged dimension of EU crisis. While it is an important book in academic terms, it also has implications for the practice of public policy and management in the EU specifically and in international organisations more generally. As such it is a book that will be of as much interest to practitioners and policy-makers as to scholars of international relations, EU governance and public administration.” (Michelle Cini, University of Bristol, UK)