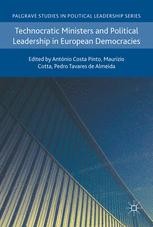 This book provides an in-depth analysis of the ‘technocratic shift’ in ministerial recruitment, measuring its extent and variations over time in fourteen European countries. It addresses the question: who governs in European democratic regimes? Just a few decades ago, the answer would have been straightforward: party-men and (fewer) party-women. More recently, however, and in varying degrees across Europe, a greater proportion of non-politicians or experts have been recruited to government, as exemplified by the 2017 election of Emmanuel Macron to the French Presidency. These experts, frequently labelled “technocrats”, increasingly occupy key executive positions and have emerged as powerful actors in the decision-making process. This edited collection explores the contemporary debates surrounding the relationship between technocracy, democracy and political leadership, and will appeal to scholars and advanced students interested in these fields.

António Costa Pinto is Research Professor at the Institute of Social Sciences, University of Lisbon, Portugal. He has published on authoritarianism, political elites, democratization and transitional justice. He co-edited Who Governs Southern Europe? Regime Change and Ministerial Recruitment, 1850-2000 (2003; first reprint, 2012) and Dealing with the Legacy of Authoritarianism: The “Politics of the Past” in Southern European Democracies (2013) (with L. Morlino).

Maurizio Cotta is Professor of Political Science at the University of Siena, Italy. His research interests include the comparative study of political elites, political institutions and Italian politics. He has co-edited and co-authored many books, namely Parliamentary Representatives in Europe (2000), Democratic Representation: Diversity, Change and Convergence (2007), and Political Institutions of Italy (2007) (with L. Verzichelli).

Pedro Tavares de Almeida is Professor of Political Science at NOVA University of Lisbon, Portugal. His research interests focus on elite recruitment, elections and political representation. He has co-edited Who Governs Southern Europe? Regime Change and Ministerial Recruitment, 1850-2000 (2003; first reprint, 2012), Perspectives of National Elites on European Citizenship (2012) and The Politics of Representation: Elections and Parliamentarism in Portugal and Spain, 1875-1926 (2017).

“Based on a precise operational definition of non-partisan technocratic ministers, clear and sound hypotheses, and an impressive wealth of data, the chapters in this edited volume systematically survey the trends relating to the appointment of such cabinet members in 14 countries since the end of WWII. Although these trends vary widely by country, the authors show that the recruitment of technocrats to the highest-ranking democratic offices is a more important phenomenon than other researchers had previously thought. The main message of this book is challenging and will certainly inspire many future scholarly works: the party government model is no longer sufficient to explain the make-up of European cabinets. Political scientists all over the world are well advised to pay heed to it.” (Professor Octavio Amorim Neto, Brazilian School of Public and Business Administration (EBAPE), Brazil)

“In the world of governing, parties are thought to be supreme. But in the complex modern political environment, ideology is shaded by competence and sometime expertise is needed. This superb collection of articles provides an important comparison of the use of technocratic ministers in Europe. Combining detailed historical empirical analysis and theoretical sophistication, it is a major contribution to the study of political elites at the ministerial level.” (Professor Keith Dowding, Australian National University, Australia)