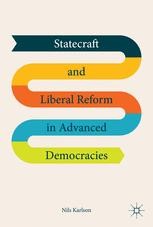 This book explains how advanced democracies and welfare states can achieve welfare-enhancing, liberal institutional reform. It develops a general theory based on an extended comparative case study of Sweden and Australia over the last 25 years, and offers an in-depth contribution to the field of institutional change, explaining how to govern a country well and how to overcome different barriers to reform, such as special interests, negativity biases and media logic. It develops the concepts of the ‘reform cycle’, ‘reform strategies’ and ‘polycentric experiential’ learning in order to explain successful reforms, and the key role of policy entrepreneurs, who introduce and develop new ideas. The book further examines why these reforms came to an end. Karlson also applies the ideas of Popperian, Kuhnian and Machiavellian reform strategies, and explains why they are needed for reform to come about.

hat and knowing how. It has the potential to be generally applicable in any advanced democracy with the ambition to improve its economy and society. This book is of interest for anyone who is concerned about budget deficits, slow growth, over regulation, lack of structural reforms and the rise of populism. It will appeal to scholars of political science, public policy and political economy.
Show all
About the authors

Nils Karlson is Founding President and CEO of the Ratio Institute in Stockholm and Associate Professor at Uppsala University, Sweden.

“From an in-depth comparison between the Swedish experience and the Australian one - another success story of reform – the author develops the best theory yet on how to understand – and pursue - reforms.” (Wilfried Martens Centre for European Studies, martenscentre.eu, February, 2018)
“Karlson provides a lucid inventory of the barriers to reforming the welfare state, all of which will be familiar to public-choice economists. … Karlson has written a fine book, one that needed to be written. He has traveled far toward understanding how liberal reforms happen and thus how they might happen again.” (John Samples, Cato Journal, Vol. 38 (2), 2018)

“Nils Karlson makes an important contribution to the economics of institutions by providing stimulating theoretical insights and two interesting case studies. … this is a thought-provoking book, which I recommend to a wide audience of readers – including non-economists – and which opens new research agendas in at least three different respects.” (Enrico Colombatto, The European Journal of Comparative Economics EJCEm, Vol. 15 (01), 2018)

“Most developed democracies and welfare states are in need of liberal reform, and this book is the best guide I know on how to do it. It makes critical contributions to public choice, theories of institutional change and public sector entrepreneurship. Strongly recommended, I read it straight through.” (Tyler Cowen, Professor of Economics, George Mason University, USA)

“A comprehensive political economy of reform requires an approach that focuses on how ideas and interest interact both to block beneficial changes and how these blockages can be overcome. Nils Karlson's Statecraft is an excellent example of this approach and is a welcome contribution to 'new institutional' political economy in the tradition of Douglass North.” (Mark Pennington, Professor of Political Economy and Public Policy, King’s College London, UK)

“Nils Karlson has written an authoritative guide to reforming the welfare state—by giving up its antique socialism and turning it to effective help for the poor.  Most effective is a mutually advantageous economy, the enrichment of the poorest among us that comes from increasing the size of the pie.  Instead of serving special interests and the seekers of unearned rents, Sweden and Australia have taken to serving the whole.  Karlson explains how. Great lessons a provided for other advanced democracies and welfare states.” (Deirdre McCloskey, Professor of Economics, History, English, and Communication, University of Illinois at Chicago, USA)

“Here, it is, a much needed book. In very clear and concise language, Karlson shows that, yes, rich democracies can implement necessary reforms. In the last few years, the political economy of reform has been analyzed here and there. Karlson goes further. He develops a theory of modern statecraft in which policy entrepreneurs are key. Mandatory reading for anybody interested in how necessary reforms can be implemented.” (Stefan Voigt, Professor of Law and Economics, University of Hamburg, Germany)

“Liberal, but lobby-encrusted democracies in mature economies normally find it hard to adjust their laws and habits flexibly to the requirements of unceasing technical, political and demographic evolution on the global scene. Yet, such adjustment is crucial for sustaining prosperity and happiness. Sweden and Australia have been exceptional over recent decades in managing much-needed legal and economic reforms. By a comparison of these two remarkable cases, this book elucidates how intellectual analysts, strategic actors in- and outside politics, and legislative and administrative agents have interacted to bring about worthwhile reforms. It offers much-needed lessons to all.” (Wolfgang Kasper, emeritus Professor of Economics, University of New South Wales, Australia)

“Nils Karlson has for decades been at the forefront of Scandinavian scholarship when it comes to constitutional political economy and liberal theory.  His new book is a much needed application of liberal principles to day-to-day worldly problems of institutional design and reform. Many books are either too theoretical and abstract or too empirical atheoretical: Karlson manages to straddle both worlds and presents important lessons.” (Peter Kurrild-Klitgaard, Professor of Comparative Politics, University of Copenhagen, Denmark)