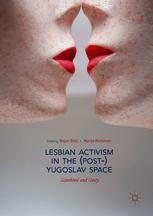 Lesbian Activism in the (Post-)Yugoslav Space

This book intertwines academic and activist voices to engage with more than three decades of lesbian activism in the Yugoslav space. The empirically rich contributions uncover a range of lesbian initiatives and the fundamental, but rarely acknowledged, role that lesbian alliances have played in articulating a feminist response to the upsurge of nationalism, widespread violence against women, and high levels of lesbophobia and homophobia in all of the post-Yugoslav states. By offering a distinctly intergenerational and transnational perspective, this collection does not only shed new light on a severely marginalised group of people, but constitutes a pioneering effort in accounting for the intricacies – solidarities, joys, and tensions – of lesbian activist organising in a post-conflict and post-socialist environment. With a plethora of authorial standpoints and innovative methodological approaches, the volume challenges the systematic absence of (post-)Yugoslav lesbian activist enterprises from recent social science scholarship.

Lesbian Activism in the (Post-)Yugoslav Space will be of interest to students and scholars across a range of disciplines, including gender studies, history, politics, anthropology, and sociology.

Marija Radoman is a researcher and teaching assistant in the Department of Sociology, Faculty of Philosophy, University of Belgrade, Serbia.

“This volume is a valuable and much needed contribution to the recent history (or herstory) of (feminist) lesbian organising in the successor states of Yugoslavia, showing the similarities and differences existing in this multinational, multilingual, and multiconfessional region.” (Sandra Antulov, Südosteuropa, Vol. 67 (4), 2019)

“Contemporary women's history and global queer studies are both the richer for this exceptional example of lesbian-led activism and scholarship. Bilić, Radoman and their contributors are equally driven by a resolve for lesbians' courage and friendship in the face of patriarchal nationalism not to be forgotten, and an urge to resist their struggles being co-opted by neoliberal and conservative forces. Thinking transnationally and acting locally, their activist-academic insight and their collective ways of writing and knowing resonate well beyond, yet always also address, the (post-)Yugoslav semi-periphery from which they speak.” (Catherine Baker, University of Hull, UK)

“An exciting volume that fills a significant gap in the literature, which all too often fails to examine the important role of lesbians and lesbian activism in the political culture of the region.” (Janice Irvine, University of Massachusetts Amherst, USA)

“This book is an invaluable repository of reflections on lesbian activist movements and initiatives, documenting them on their own terms and in their own words. Skillfully negotiating between academic and activist practices, temporalities, styles and concerns, its intellectual, activist and – for some – therapeutic interventions will shape this field over the coming years.” (Andrew Hodges, Leibniz-Institute for East and Southeast European Studies, Germany)