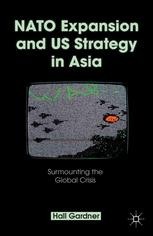 NATO Expansion and US Strategy in Asia

Surmounting the Global Crisis critiques the impact of NATO enlargement and the US 'pivot to Asia' on both the Russia and China and examines how these dual US-backed policies may influence key countries in the Euro-Atlantic, wider Middle East, and Indo-Pacific regions in general.

Hall Gardner is Professor and Chair of the International and Comparative Politics Department at American University of Paris, France.

'Hall Gardner's book touches upon one of the crucial turning points in post-Cold War history: the failure of Western leaders and particularly of several US administrations to build stable strategic relations with the post-Soviet Russia. The unilateral expansion of NATO to the East perceived by Moscow more as a political humiliation than a strategic challenge is used by Vladimir Putin to justify his new 'Eurasian' strategy and his search for allies in the East. Gardner considers that there is still time to repair the damage and proposes non-conventional answers to the security challenges of the new century.' - Andrei Grachev, last official spokesman of Soviet President Mikhail Gorbachev, Chairman of the Scientific Committee of the New Policy Forum

'Hall Gardner's contribution to scholarship on the relationship dynamics between Europe, Asia, and Russia is well established. This book takes a further step. Gardner proposes an unprecedented architecture for world governance, which goes against established clichés and views.' - Roberto Savio, Inter Press Service

'NATO Expansion and US Strategy in Asia is an impressive and complex book. It provides a synthesis and assessment of global trends and is essential and provocative reading for everyone with an interest in the practice of international affairs. It argues that in order to handle contemporary global crises, membership in the Alliance [and European Union] must be expanded to include Russia, Turkey, and the Ukraine.' - Robert J. Jackson, Professor of Government and International Relations, University of Redlands, and author of Global Politics in the Twenty-First Century and Temptations of Power: The US in Global Politics since 9/11

"In his newest book Hall Gardner not only gives us an excellent historical oversight of the post-World War II role of the USA in Asia, he also offers an in-depth analysis of the reasons and background of President Obama's recent 'Pivot' to Asia." - Marcel H. Van Herpen, Director, The Cicero Foundation