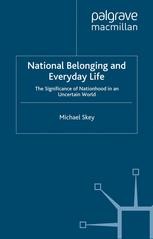 The Significance of Nationhood in an Uncertain World

This book analyses the current debates around national identity and multiculturalism by addressing three key questions; why do so many people treat as common sense the idea that they live in and belong to nations? And, why, and for whom, might this idea be significant, notably in an era of increasing global uncertainty?

MICHAEL SKEY is Lecturer in Media & Culture at University of East Anglia, UK. His research interests include nations and nationalism, theories of everyday life, cosmopolitanism, media rituals and sport and he has published work on these subjects in a range of journals including Nations & Nationalism, Sociological Review, Journal of Cultural Geography, Ethnicities and Cultural Sociology.

'In this clearly and engagingly written study, Michael Skey explores the often neglected traces of nationalist thinking found in everyday speech, and so provides an important reminder of the distance of much abstract writing about cosmopolitanism from daily experience. Through his sensitive analysis, Skey uncovers forms of anxiety and compensation that are of great relevance to contemporary policy debates in Europe and elsewhere. His book should be of wide interest to researchers and students of cultural and political sociology, media and cultural studies, and nationalism.'

'Michael Skey's book deconstructs the 'common sense' behind banal nationalism and explores the specific political projects of belonging which underlie people's sense of selfhood and community in the contemporary world. The book successfully combines theoretical and empirical investigations and helps to clarify some of the naturalized assumptions about the society we live in.'

- Nira Yuval-Davis, Director of the Centre of the Research Centre on Migration, Refugees and Belonging (CMRB), University of East London, UK

'This book represents a considerable intellectual achievement. It is both scholarly and readable, theoretically sophisticated and grounded in insightful ANALYSIS of the minutiae of everyday talk. The author's focus on the taken for granted in contemporary English discourse on nationhood provides a model of interdisciplinary scholarship.'

'Skey's is a timely contribution to an issue that continues to be highly relevant for the media, the academic community, policy makers and society in general.' - Ethnic and Racial Studies

'This book's analysis and argumentation are convincing, and will sharpen many scholars' thinking about the cultural and psychological consequences of globalization.' - American Journal of Sociology

'With its lucid, detailed passages, theoretical scope, and well supported insights, National Belonging and Everyday Life is a sophisticated account of a relevant andnecessary theme in contemporary life. Communication scholars and others who focus on social interaction, group identities, and the politics of national belonging will all find cause to engage with this book.' -Contemporary Sociology

'A timely contribution to an issue that continues to be highly relevant for the media, the academic community, policy makers and society in general.' - Ethnic and Racial Studies

'Skey has given us plenty to think about. He's outlined a theory for how the nation operates in everyday life, and, unlike some of his predecessors, he's populated that theory with evidence from the voices of ordinary people. In so doing, Skey's book has edged our thinking on nationalism a little bit further.' - Nations and Nationalism