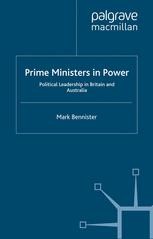 Political Leadership in Britain and Australia

A study of prime ministerial leadership in Britain and Australia. Tony Blair and John Howard were election winning leaders in two similar countries. They succeeded in dominating politics for over 10 years, but both fell dramatically from office. This book asks how these prime ministers established such predominant positions.

MARK BENNISTER Lecturer in Politics at Canterbury Christ Church University, UK. He has published on comparative prime ministerial leadership. He is an Honorary Research Fellow at the Constitution Unit, University College London. He was previously a Teaching Fellow at UCL and Sussex University. He has worked for the Australian High Commission in London and as a parliamentary researcher.

'Mark Bennister's book will be essential reading for all students of prime ministerial power and executive governance. He moves the debate onto new territory, using a comparative approach (looking at Tony Blair in Britain and John Howard in Australia) and integrating analysis of institutional and party factors, personal skills and leadership styles. Bennister is a careful, systematic and forensic analyst. The book offers many insights into Blair and Howard's long years of predominance but works successfully also as a primer on how to go about making sense in general of Prime Ministers as political leaders.' - Kevin Theakston, Professor of British Government, University of Leeds, UK

'This book makes a significant new contribution to our understanding of comparative political leadership. Through an exhaustive and clear analysis of the personal and political resources at their disposal, it reveals how two very different individuals working in distinctive political settings former British prime minister Tony Blair and the ex-premier of Australia, John Howard each found ways of stretching their power through personalized electoral appeals, although each was ultimately constrained by party colleagues. Mark Bennister has produced a valuable new study that deserves the attention of all serious students and scholars of political leadership.' - Paul Webb, Professor of Politics, University of Sussex, UK

'Mark Bennister's comparative study of Tony Blair and John Howard is a revelation. Few are the books that allow us to see across national difference to recognise the core elements that empower or limit prime ministers. Rarer still are those that can overcome a narrow focus on institutions, or personalities, or the core executive to encompass all of those things and adroitly to demonstrate that only through understanding their interaction will we see how power is gained and sustained. This is a major contribution to prime ministerial studies and to leadership analysis at large.' - James Walter, Professor of Political Science, Monash University, Melbourne, Australia