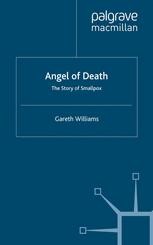 The Story of Smallpox

The story of the rise and fall of smallpox, one of the most savage killers in the history of mankind, and the only disease ever to be successfully exterminated (30 years ago next year) by a public health campaign.

GARETH WILLIAMS is Professor of Medicine and former Dean of Faculty at the University of Bristol, UK. He has written or co-authored over 20 books, including the Textbook of Diabetes (named BMA Book of the Year) and has contributed to more 30 others, including the Oxford Textbook of Medicine. He also writes general and humorous articles for a wider readership; his appearances on national and international radio and TV have related to the missed diagnosis of Squirrel Nutkin as well as anti-obesity pills.

Proceeds from the sale of this book will be given to the Edward Jenner Museum, Berkeley, UK (visit www.jennermuseum.com)

'This extraordinary book brings alive the sheer horrors of smallpox and how mankind has managed to wipe it out using vaccination, pioneered by a Gloucestershire country doctor in 1796. This history has a very modern message, and this book needs to be read by everyone interested in public health today.'

'The Angel of Death is a fascinating account of the most terrible disease to afflict mankind. Smallpox showed no mercy: the young, old, poor and royalty all equally at risk; whole societies almost wiped out in its inexorable wake. 2010 marks the 30th anniversary of its final eradication; Gareth Williams charts this compelling story with a plot that weaves seamlessly between cultures and centuries. Written in a wonderfully flowing and engaging style, this is a must read for all lovers of history. Highly relevant for today as the fight lives on to banish other deadly diseases from the world.'

'Filled with fascinating historical detail, this story resonates with contemporary concerns about epidemics and the fight against them. Gareth Williams effortlessly weaves together medical science writing and social history to tell the compelling tale of a battle against a deadly disease.'

'In lively prose with unpatronising insight into past medical dilemmas, he dramatises the scourge and its treatment first by variolation (immunisation with live smallpox virus) then vaccination, but also shows how controversial smallpox vaccination was during the 19th century.' - The Lancet

'...the author explores one of the most exciting success stories in the history of medicine. His book also gives original and engaging insights into the anti-vaccination campaigns which remain active today.' - The Guild of Health Writers

'...an engaging narrative, in which medical history is interweaved with social history and reflections on contemporary issues.' - BBC History Magazine

'Williams's account of our battle with the disease revisits historical accounts of its horrendous impact and the fascinating story of medical progress - including the pioneering use of vaccination by a country doctor in 1796 - and its relevance in the fight against modern epidemics.' - The Times

'Williams has managed to bring to life one of the most enthralling, life changing success stories in the history of medicine' - Laboratory News

'A breezy, accessible account by a professor of medicine.' - The Week