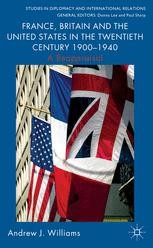 France, Britain and the United States in the Twentieth Century 1900 – 1940

'This fascinating volume asks important questions about the development of International Relations as a field of study since the early twentieth century, focusing on the three main Western democracies America, Britain and France. It is to be particularly welcomed for the way in which it fuses a profound understanding of both History and International Relations, showing that 'IR' itself has a history one that was largely shaped by changing global realities.' - John W. Young, University of Nottingham, UK

'A very original piece of research about three crocodiles living in the same swamp, where friendship, distrust and rivalry are a daily routine. This fascinating story is recounted by Andrew Williams who combines his talents of historian, political scientist and IR scholar to good effect.' - Bertrand Badie, Institut d'Etudes Politiques de Paris (Sciences Po), France

'By bringing France back into the story of the West as political project, Williams makes a seminal contribution to the study of

transatlantic security relations, one that will be welcomed not only by his fellow diplomatic historians, but also by political scientists and others with an interest in international relations theory and foreign policy analysis." - David Haglund, Queen's University, Canada

'Williams offers a much-needed corrective to the assumption that French economic, political and strategic ideas had little or no influence on modern IR theory and practice, he also provides a new lens through which we can gain a greater understanding of the deeper intellectual currents that helped shape and define the twentieth century world.' - David B. Woolner, the Franklin and Eleanor Roosevelt Institute, and co-editor of FDR's World: War Peace and Legacies (Palgrave Macmillan, 2008)

'Andrew Williams has written an important and illuminating study of the trans-Atlantic intellectual currents that have shaped contemporary theorising about the nature of international politics. Blending the history and theory effortlessly, he has demonstrated that French political philosophy played a fundamental role in both the origins and evolution of international thought in the West. Williams provides a challenging new perspective on both the history of Franco-British-American relations and the emergence of international relations as a distinct discipline.' - Peter Jackson, University of Glasgow, UK

'At the end of the day I find it hard not to be entranced by this book. The depth of knowledge, the ability to range over scholarship in both history and IR, and Williams's talent for telling a good story all add up to a fine text. By allowing us to see the Anglo-American tradition of international thought through a French lens, Williams forces us to face many of the false certainties in the British and American accounts of the development of the modern world order. On this account alone the book is subtly subversive. For historians it fleshes out a story, the lessons of which are still not clear. For IR scholars it offers a new perspective on the events that created the contemporary international system. Through it all, like a thread on a string of beads, lies the lesson that to fully understand the development of the global order we need to listen to other voices speaking different languages.' - Lucian Ashworth, H-Diplo Roundtable Review, Volume XVII, No. 3, 5 October 2015