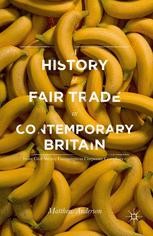 A History of Fair Trade in Contemporary Britain

This book offers an original contribution to the empirical knowledge of the development of Fair Trade that goes beyond the anecdotal accounts to challenge and analyse the trading practices that shaped the Fair Trade model. Fair Trade represented a new approach to global trade, corporate social responsibility and consumer politics.

Dr Matthew Anderson has worked on Fair Trade projects with a range of stakeholders including the Fairtrade Foundation, the Co-operative and Divine Chocolate. His research interests focus on the intersection between civil society organisations and business, and he teaches on several courses in the areas of organisational behaviour, human resource management and research methods. His primary teaching responsibility is the coordination of a new unit on Leadership, Ethics, Governance and Sustainability.

“Anderson offers an engaging, thought-provoking, rigorously investigated, and genuinely original treatment of fair trade in Britain … that is a must read for academics and practitioners concerned with fair trade, consumer politics, social movements, and trade justice more widely. … The book should be widely read and find its way onto many shelves and classrooms. … provides a novel understanding of the contemporary history of fair trade that reveals fresh insights and new directions for further inquiry.” (Gavin Fridell, Review of Agricultural, Food and Environmental Studies, Vol. 97, 2016)

"In this engagingly written and nuanced appreciation of fair trade in Britain, Matthew Anderson provocatively challenges us to look beyond the individual and see the lineages of historically rooted collective consumption. As only a true historian can do, Anderson offers us fresh insights and a rigorous grounding that is bound to be of great interest for practitioners and scholars alike." Gavin Fridell, Saint Mary's University, Canada

"Despite the significant growing interest in the Fair Trade phenomena as global sales grow to nearly £6 billion, there has been limited work on Fair Trade's historical foundations until now! This book provides the first in-depth analysis of the various historical antecedents to the modern Fair Trade movement and markets. The book provides illuminating perspectives on the role of faith-based organisations, co-ops and trade unions, political movements and development organisations in the birth, emergence and growth of Fair Trade." - Bob Doherty, University of York, UK

'Fair Trade has generated an impact on daily shopping which many entrepreneurs only dream of. It does this by offering a mix of practical change, morality, repeat consumption, marketing message, visibility and normality. Matthew Anderson's book provides a fine review of how this mix came about and how its parent movement became so significant. This is a much needed audit of Fair Trade's pursuit of justice in a neo-liberal world.' - Tim Lang, City University London, UK