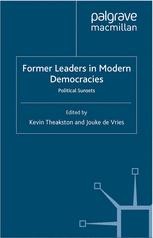 What comes next for a former leader in a democracy - a Prime Minister or President obliged to leave office because they have lost an election, come to the end of their constitutionally-fixed term, lost the backing of their party, or chosen to leave? This book analyses the role and political influence of former leaders in Western democratic states.

'The gods of politics are wrathful deities. How they like to grind the once mighty. Kevin Theakston and his colleagues have written a fine book on the fallen blending nicely a sense of both humanity and tragedy. Leading a country is not a pursuit that brings recollections in tranquillity. All would-be Prime Ministers and Presidents should read this book before they run for office.'

'What do Presidents and Prime Ministers do after they leave office? Do they enjoy continued influence, or just fade away? Theakston and de Vries' collection brings together a formidable range of experts in the field of leadership studies to examine this issue. Such a synthesis of analyses is as welcome as it is necessary, for political leadership studies are scattered and under-researched. The book is rich in anecdotes, and tells us too of the personalities involved, the dedication as well as the egos, and their role. The book is comprehensive in its comparative scope and coverage of constitutional and conventional frameworks, and the political cultures that prevail in the wide range of countries studied; so much so, that this penetrating focus on what politicians do 'after power' tells us a great deal about the nature of politics and power themselves in the range of countries studied ... The study is a much-needed contribution to the theorisation of comparative political leadership.'