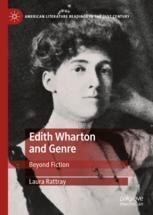 Based on extensive new archival research, Edith Wharton and Genre: Beyond

genres outside those with which she has been most closely identified. So much

more than an acclaimed novelist and short story writer, Wharton is reconsidered

in this book as a controversial playwright, a gifted poet, a trailblazing travel

writer, an innovative and subversive critic, a hugely influential design writer, and

an author who overturned the conventions of autobiographical form. Her

versatility across genres did not represent brief sidesteps, temporary diversions

from what has long been read as her primary role as novelist. Each was pursued

fully and whole-heartedly, speaking to Wharton’s very sense of herself as an

artist and her connected vision of artistry and art. The stories of these other Edith

Whartons, born through her extraordinary dexterity across a wide range of

genres, and their impact on our understanding of her career, are the focus of this

has long been supposed.

Laura Rattray is Reader in American Literature at the University of Glasgow,

Scotland, and Director of its Centre for American Studies. Her work on Wharton

includes, as editor, Edith Wharton in Context (2012), The Unpublished Writings of

“Laura Rattray expands our visions of Edith Wharton and, in doing so, makes Wharton’s life and authorship far more representative of women’s experience than previously understood. Edith Wharton and Genre is indispensable reading not only for Wharton scholars but also all those interested in women’s writing across genre.” (Myrto Drizou, Women's Studies, February 1, 2021)

“Laura Rattray’s meticulously researched and beautifully written study fully establishes not only Wharton’s amazing versatility as an author, but her virtuosity in genres as diverse as poetry, travel-writing, play-writing, design, life-writing, and literary theory. In lively prose, Edith Wharton and Genre also offers a more socially conscious and feminist Wharton, a woman who was often, as Rattray argues, a “trailblazer.” So, too, is Rattray, who has changed the way we will think of Edith Wharton.” (Julie Olin-Ammentorp, Professor of English, Le Moyne College, is the author of Edith Wharton, Willa Cather, and the Place of Culture and of Edith Wharton’s Writings from the Great War. She is a past president of the Edith Wharton Society)

“Edith Wharton and Genre offers a radical and radicalizing perspective on Wharton and American literary history. By making the author’s poetry, drama, autobiography, and—most impressively—literary theory the center of her inquiry, Laura Rattray reveals the creative and intellectual deliberateness of Wharton’s generic choices and their significance to the long nineteenth century.” (Susan Tomlinson, Associate Professor of English, University of Massachusetts Boston and Editor, Legacy: A Journal of American Women Writers)

“In Rattray’s hands, Edith Wharton is re-presented as a writer mastering a wide range of genres beyond the celebrated fiction.  Wharton’s achievements in poetry, drama, architecture and design, criticism, memoir, and travel writing emerge as sites for her most confident, radical experiments.  This game-changing book will lay to rest the image of the grand dame, showing Wharton to defy categorization and to be as “large” and full of “multitudes” as the Whitman she so admired.” (Emily J. Orlando, Professor of English at Fairfield University (USA) and author of Edith Wharton and the Visual Arts)

“Rattray’s volume shows that Wharton consistently rejected shortcuts across the multiple genres in which she wrote. The same might be said of Rattray’s scholarship. In an authoritative, critical voice based on careful research, Rattray transforms the successful lady novelist created, in part, out of gender and social biases into the experimental woman artist who embraces risks in both subject matter and presentation.” (Rita Bode, Professor of English Literature, Trent University, Canada)

“Laura Rattray places between the covers of a single book an original study of all Wharton’s work apart from her fiction. Her constantly interesting arguments make intriguing new connections between disparate material and she brilliantly demonstrates how the different genres in which Wharton wrote nourish and sustain each other. Wharton emerges as a far greater literary figure than most of her (often dismissive) critics have been willing to recognize.” (Virginia Ricard, Bordeaux Montaigne University)

“In this lively and superbly written survey of Edith Wharton’s writings in genres other than prose fiction, Rattray demonstrates the broad repertoire of a writer who was more than a novelist of manners. A welcome addition to Wharton scholarship, Rattray’s study gives us yet more reason to be in awe of Wharton’s breadth of knowledge and her indefatigable energy.” (Maureen E. Montgomery, Adjunct Associate Professor, University of Canterbury, New Zealand and author of Displaying Women: Spectacles of Leisure in Edith Wharton's New York)