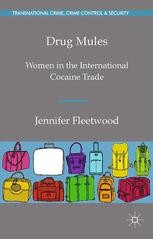 Women in the International Cocaine Trade

Winner of the British Society of Criminology Book Prize, 2015

Fleetwood explores how women become involved in trafficking, focusing on the lived experiences of women as drug mules. Offering theoretical insights from gender theory and transnational criminology, Fleetwood argues that women's participation in the drugs trade cannot be adequately understood through the lenses of either victimization or agency.

"Despite the plethora of studies in criminology about women and crime that have appeared in the last thirty years, the preponderance of scholarship has focused on women as victims, with relatively little adding to our understanding of women as offenders. In this groundbreaking new book, Jennifer Fleetwood employs feminist criminology to illustrate how women are both victims and agents in illicit enterprises. Focusing on drug mules, women who transport cocaine across international borders, this book traces the various roles women play, the consequences of these roles, and what it means for the future of female criminality. Engaging, methodologically sound, theoretically driven, and just a plain 'good read,' Drug Mules promises to sit on our shelves as one of the most important works on the contemporary global drug trade, women and crime, and changing gender roles published in the last decade or more." - Patricia A. Adler, University of Colorado, Boulder

"The fieldwork in this book is only matched by a handful of ethnographers worldwide. Fleetwood's book is a big advance in understanding women's participation in transitional crime. Unpacking the international drug trade using ethnographic data is truly extraordinary. As opposed to most other researchers in this tradition, Fleetwood also explores new ground theoretically. Her original use of feminism and narrative theory is nothing less than impressive, and makes the book a must-read for audiences far beyond those interested in the drug trade. This is contemporary criminology at its best." - Sveinung Sandberg, University of Oslo, Norway

"In this beautifully written, painstakingly analyzed, and highly readable book, Fleetwood manages to make us understand the mindset and behavior of drug mules while keeping them at an emotional distance ... [She] has truly convinced us that women drug mules are a complex phenomenon that cannot be understood in simple binary terms, and this conclusion flows logically from her data. This masterfully delivered work, a cornerstone of what is being called narrative criminology, will be of great interest to gender scholars who are also interested in deviance and crime, as well as international research." - Rosemary Barberet, Gender and Society