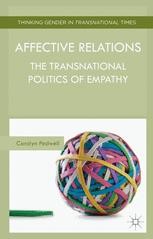 The Transnational Politics of Empathy

Exploring the ambivalent grammar of empathy where questions of geo-politics and social justice are at stake - in popular science, international development, postcolonial fiction, feminist and queer theory - this book addresses the critical implications of empathy's uneven effects. It offers a vital transnational perspective on the 'turn to affect'.

Carolyn Pedwell is Senior Lecturer in Media and Cultural Studies at Newcastle University, UK. She is author of Feminism, Culture and Embodied Practice: The Rhetorics of Comparison and co-editor of 'Affecting Feminism: Questions of Feeling in Feminist Theory', a special issue of Feminist Theory.

“It not only contributes to a growing body of scholarship on affect theory and neoliberal governmentality, but also problematises the ways in which empathy is mobilised by Western corporations, governments and humanitarian organisations. Affective Relations is a thought-provoking read that will appeal to a broad range of scholars, including those interested in postcolonial or transnational feminism, critical race theory and/or political anthropology.” (Robin Valenzuela, feminist review, Vol. 116 (1), July, 2017)

“Pedwell engages with the politics of empathy as a politics of emotion that is simultaneously material and discursive, relational and embodied, local and transnational. Due to its disciplinary breadth, Affective Relations has something to offer anyone studying emotion from a biological, cultural, and/or political perspective.” (Nicole Laliberté, Emotion, Space and Society, Vol. 21, November, 2016)

“Pedwell’s rich study examines the diverse ways in which empathy is mobilised – from political speeches that uphold neoliberalism, to postcolonial literatures that refuse certain forms of empathic connection. … The framework of Affective Relations is strongly interdisciplinary, bringing literatures from feminism, postcolonialism, neuroscience, psychoanalysis and popular science into dialogue. … This is an ambitious project that highlights how empathy materialises in different spheres, through different media, and through different types of encounter.” (Amanda Rogers, societyandspace.org, April, 2015)

"While the book deals broadly with affect, the focus on empathy breaks through the prevailing paralysis created by trying to micro-manage the distinctions between affect, emotion and feeling. Instead Pedwell provides a refreshingly clear account of the many ways in which 'the turn to affect' has irrupted across numerous disciplines with unexpected consequences. Affective Relations gives a much-needed critical evaluation of the contexts within which empathy/emotion/affect function. For example, cultivating empathy holds no guarantees for achieving the moral high ground and is always predicated on how one is located. Pedwell crucially reminds us that translating across affective categories is always embedded in specific societal and cultural meaning systems that include neo-colonial enterprises in the development field where identifying with the emotional lives of marginalised others often translates into new models of appropriation and reification." - Sneja Gunew, University of British Columbia, Canada
"This book achieves a difficult task: it questions how empathy is assumed as a political as well as affective resolution without giving up on the promise of empathy. Characterised by generous (even empathetic) reading practices throughout, Affective Relations explores how empathy is translated and activated in transnational domains. By not assuming that empathy begins or ends with human subjects, this book succeeds in opening empathy up by opening empathy out. It offers a careful and thoughtful exploration of empathy as an embodied relation, one that confronts as well as connects, and will be a very welcome addition to the growing scholarly literature on affect and emotion." - Sara Ahmed, Goldsmiths, University of London, UK