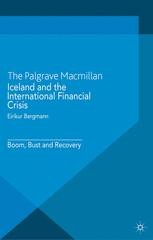 Iceland and the International Financial Crisis

Eirikur Bergmann explains the exceptional case of Iceland's fantastical boom, bust and rapid recovery after the Crash of 2008 and explores the lessons for the wider EU crisis and for over-reaching economies that over-rely on financial markets.

Eirikur Bergmann is Professor of Politics and Director of Centre for European Studies at Bifröst University, Iceland. He is a leading expert on Iceland's political economy and has published several books and many articles on Iceland's foreign relations. In 2010 he was elected onto Iceland's Constitutional Council, which had the task of writing a new constitution for the young republic.

"Eirikur Bergmanns' book offers a fascinating insight to the dramatic events around Iceland's meltdown in 2008. The book is comprehensive in scope and provides convincing historical, economical and political explanations to Iceland's boom and bust as well as strong analysis of the complexities of recovery in its wake. The case study offered in this book is an important contribution to understanding the wider euro crisis and the risks for regimes that over rely on capital markets. The lively style the book is written in a way that makes for an enjoyable read and opens up this fascinating case also for those not versed in Icelandic politics and it is a must-read for understanding the economic crisis that is still affecting most of the Transatlantic area." - Federiga Bindi, University of Rome, Italy

"In the course of the 20th century, the small but fiercely independent state of Iceland moved from being one of the poorest and most backward societies in Europe to being one of the most modern and prosperous. In the last few years, Iceland has experienced an incredible financial boom, followed by a truly spectacular bust, and then a relatively rapid recovery. Combining his background as a professional academic and a political commentator Eirikur Bergmann has written a highly recommendable and thought-provoking account of this dramatic Icelandic saga. The book should be mandatory for anyone trying to understand recent developments in Iceland, but it is also of far more general interest, as a core case study on the international financial crisis and the way in which democratic societies can respond to it." Fredrik Sejersted, University of Oslo, Norway

"Iceland's remarkable boom, boost, and apparent recovery over recent years raise many questions for students of politics. How could such catastrophic policy failure occur? How can a democratic system respond to such financial collapse? How can an economy seemingly recover from this collapse so quickly? What are the long-term political and economic implications of such deep convulsion? Eiríkur Bergmann's book extends well beyond the narrow constraints of conventional economic analysis to answer these questions. Drawing on the tradition of critical political economy, the author develops an original analysis with important implications across many sub-fields of political studies." - Alan Renwick, Reading University, UK

"Iceland's spectacular financial crisis provides for an fascinating case to study the much wider euro crisis. Eirikur Bergmann's book offers a comprehensive insight to these dramatic but highly complex events, which have been overly simplified in the media. His lively and thought provoking writings opens up this extreme case to foreign readers, which, as a result, becomes an important contribution to understanding the causes and ramifications of the international financial crisis." - Jernej Pikalo, Ljubljana University, Slovenia

"In 2008 'Icesave' became almost as iconic as '9/11'. Combining mastery of topics ranging from financial bubbles to postmodern identity, with a profound understanding of the very specific Icelandic social formation, Eirikur Bergmann sheds light on a very poorly understood subject. A truly original contribution to the political economy of the financial crisis." - Magnus Ryner, King's College, University of London, UK

"Bergmann's account of the greatest economic crash in the world's history in one of the world's smallest countries is at the same time a depressing and fascinating read. His account traces the origins and nature of the economic crisis that hit Iceland, and how this country's response - so different from that of mainland European states - was to see it emerge more quickly from the gloom of economic depression." - David Farrell, University College Dublin, Ireland