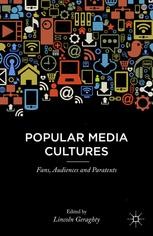 Popular Media Cultures explores the relationship between audiences and media texts, their paratexts and interconnected ephemera. Authors focus on the cultural work done by media audiences, how they engage with social media and how convergence culture impacts on the strategies and activities of popular media fans.

'If fan studies has a supergroup, this is their new album: scholars at the top of their game, with fresh essays that already feel like classics. Over two decades since Henry Jenkins' Textual Poachers launched the discipline, this book demonstrates that the study of fan engagement illuminates texts from Conan Doyle's A Study In Scarlet through Hollywood thriller movies of the 1940s and Italian video nasties of the 1980s, right up to the reality TV shows of the 2010s. Vital, engaging, entertaining and gripping.' - Will Brooker, Professor of Film and Cultural Studies, Kingston University, London

'Collecting chapters from some of the top fan and media scholars writing today, Popular Media Cultures: Fans, Audiences and Paratexts brings the nascent study of media paratexts to the forefront of media studies. In a rapidly converging media environment, paratexts are the new texts. Through accessible and in-depth studies of such varied (para-)texts as Lego, Sherlock Holmes, Harry Potter, Doctor Who, True Blood, Cannibal Holocaust, and the works of Joss Whedon, among many others, Geraghty's collection reinvigorates contemporary scholarship, and is sure to be a must read for any media scholar.' - Paul Booth, Associate Professor of Media and Cinema Studies/Communication Technology, DePaul University, Chicago.

'We have long understood that paratexts such as marginalia, personal letters, and public responses contribute to our deeper understanding of classic works of literature. The publication of Popular Media Cultures suggests that we are finally doing to modern media texts what has long been accepted practice in other disciplines. Geraghty's thought provoking collection prompts us to re-evaluate what constitutes a text in our mediated world and to reconsider how we make meaning from this multiplicity of texts.' - Katherine Larsen, The George Washington University, Principal Editor of Journal of Fandom Studies