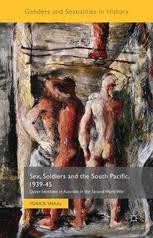 Queer Identities in Australia in the Second World War

Sex, Soldiers and the South Pacific, 1939-45 explores the queer dynamics of war across Australia and forward bases in the south seas. It examines relationships involving Allied servicemen, civilians and between the legal and medical fraternities that sought to regulate and contain expressions of homosex in and out of the forces.

Yorick Smaal is ARC DECRA Research Fellow at Griffith University, Australia. He is an Australian social historian with particular interests in sex and gender, war and society, and law and criminal justice.

“Smaal’s monograph … fulfills the aims of the Palgrave Macmillan series, Genders and Sexualities in History to ‘accommodate and foster new approaches to historical studies in the field of genders and sexualities’ and to focus on ‘interconnected themes of genders, sexualities, religions/religiosity, civil society, class formations, politics and war’… . read his book, engage with the characters and ideas. You won’t be disappointed.” (Diane Bell, Honest History, honesthistory.net.au, March, 2016)

“The study appears in a series on ‘Genders and Sexualities in History’ and one of its strengths is its subtle treatment of this relationship. Smaal establishes the significance of gender performance in ‘homosex’ during the 1940s. … This book is a valuable addition to the international literature on queer sexualities. … Smaal has produced an exemplary work of social, sexual, and gender history that also contributes to our understanding of the relationship of war and society.” (Frank Bongiorno, Social History, Vol. 41 (2), March, 2016)

“The book is a great work and interesting for sexologists, ethnologists, and historians. A comprehensive literature list and index make it round.” (Florian Georg Mildenberger, Sexuality and Culture, Vol. 20, 2016)

"Yorick Smaal has written an extraordinary history of Australian queer men during the Second World War. Based on extensive and meticulous archival research, and written with eloquence and compelling power, Sex, Soldiers and the South Pacific is a landmark work. It illuminates the sexual identities and practices of queer men during war-time, especially in Queensland and the South Pacific region. In so doing, Smaal opens up significant and new perspectives in our understandings of the cultural and social history of the 1940s, examining little known, but central aspects of the history of sexuality in Australia. This is an innovative, nuanced and original book." - Joy Damousi, Professor of History and Australian Research Council Laureate Fellow, University of Melbourne, Australia

"With rich detail and vivid colour, Yorick Smaal explores the diverse queer worlds that took shape on the edge of the war in the South Pacific. Weaving together intimate personal testimonies and the records of civil and military authorities, Smaal reveals the light and shade of men's lives and loves in Brisbane, New Guinea, and beyond. In a time of war, the encounters between Australians and Americans, soldiers and civilians, and doctors, police officers, and ordinary men had long-lasting effects. Sex, Soldiers, and the South Pacific is an important and original study of the making of national queer cultures in a transnational world." - Matt Houlbrook, Professor of Cultural History, University of Birmingham, UK

"Queer sex is a raunchy international affair in this rich, thoughtful study of relations between men in Australia during the Second World War. Here, in poignant detail, we watch the active intercourse of Australian and American males making and remaking themselves, the feminine and masculine, and sexual activity." - Jonathan Ned Katz, Founder, Co-Director, OutHistory.org