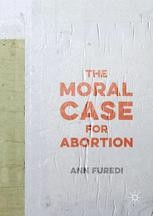 The Moral Case for Abortion

This thought-provoking book sets out the ethical arguments for a woman’s right to choose. Drawing on the traditions of sociological thinking and moral philosophy, it maintains that there is a strong moral case for recognizing autonomy in personal decision-making about reproductive intentions. More than this, it argues that to prevent a woman from making her own choice to continue or end her pregnancy is to undermine the essence of her humanity. The author, a provider of abortion services in the UK, asserts that true respect for human life and true regard for individual conscience demand that we respect a woman’s right to decide, and that support for a woman’s right to a termination has moral foundations and ethical integrity. This fresh perspective on abortion will interest both pro- and anti-choice individuals and organizations, along with academics in the fields of gender studies, philosophy, ethics and religion.

Ann Furedi is Chief Executive of British Pregnancy Advisory Service, a not-for-profit provider of abortion services in the UK. She is a leading pro-choice advocate and has written extensively on issues relating to pregnancy and birth control.

“This work sets out in meticulous detail many of the fundamental issues and biases that surround abortion decision making and access. … it is worthwhile. It sets out the important issues and contentions. It makes you face yourself. It acknowledges the woman beside you.” (Ann Brassil, Conscience, consciencemag.org, Issue 3, November, 2017)

“She offers a convincing case for the removal of abortion from the framework of criminal law. … The Moral Case For Abortion makes a persuasive case for the decriminalisation of abortion. It deserves a wide readership, not least among doctors who have for too long colluded in the abrogation of women’s rights in this crucial area of their lives.” (Michael Fitzpatrick, Spiked, spiked-online.com, September, 2016)

“This thought-provoking book provides a fresh perspective on abortion, which will interest both pro- and anti-choice individuals and organizations, along with academics in the fields of gender studies, philosophy, ethics and religion.” (Garima Shrivastava, The ASAP Blog, asap-asia.org, August, 2016)

“In a world of increasingly polarised positions on issues relevant to the human rights of marginalised and oppressed groups, Furedi's philosophical exploration of abortion and its discontents is a breath of fresh air.” (Julie Bindel)

“Ann Furedi is to be greatly congratulated on challenging two assumptions that run through debates about abortion law, both at political and at personal level. The first is that abortion is  an intrinsic evil, which though  grudgingly permitted by law, is to be avoided  if possible. The second is the extraordinary belief that, because to bring about an abortion requires medical intervention, the decision to abort must be dressed up as a medical decision. I hope her challenge will be influential.” (Baroness Professor Mary Warnock DBE FBA FMedSci, former chair of the Committee of Inquiry into Human fertilisation and Embryology and Mistress of Girton College, Cambridge, UK)

“As someone who provides abortion as the expression of deep conscience, I figured out a long time ago that in addition to being smart enough one has to be ethically good enough to do this work. Ann Furedi, in The Moral Case for Abortion, makes the morality of abortion so profoundly clear that she leaves nothing else to be said.” (Willie J. Parker, MD, MPH, MSc, reproductive justice advocate and abortion provider, USA)

“At last, a book that makes the case for the morality of abortion. Furedi takes the tough questions that plague the political and personal minefield that society battles about a woman’s right to choose and confronts them head-on. Using systematic and careful analysis and a lifetime of work in women’s reproductive healthcare, this book helps unpack the moral and ethical considerations and contradictions. From the philosophical to the practical, Furedi gives us a handy toolbox of arguments and cutting-edge reflections. This book will embolden advocates—and confound opponents—of bodily autonomy and freedom of conscience.” (Jon O’ Brien, President, Catholics for Choice, USA)