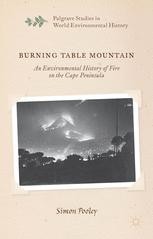 An Environmental History of Fire on the Cape Peninsula

Cape Town's iconic Table Mountain and the surrounding peninsula has been a crucible for attempts to integrate the social and ecological dimensions of wild fire. This environmental history of humans and wildfire outlines these interactions from the practices of Khoikhoi herders to the conflagrations of January 2000. The region's unique, famously diverse fynbos vegetation has been transformed since European colonial settlement, through urbanisation and biological modifications, both intentional (forestry) and unintentional (biological invasions). In all the diverse visions people have formed for Table Mountain, aesthetic and utilitarian, fire has been regarded as a central problem. This book shows how scientific understandings of fire in fynbos developed slowly in the face of strong prejudices. Human impacts were intensified in the twentieth century, which provides the temporal focus for the book. The disjunctures between popular perception, expert knowledge, policy and management are explored, and the book supplements existing short-term scientific data with proxies on fire incidence trends recovered from historical records.

Simon Pooley is Lambert Lecturer in Environment, Department of Geography, Birkbeck University of London, UK. He has a D.Phil in Environmental History (University of Oxford) and has published on wildfire, biological invasions, crocodilian conservation, human-wildlife conflicts and doing interdisciplinary research, in several books and the major environmental history and conservation science journals.

“A fascinating study of fire on the Cape Peninsula of South Africa … will appeal to audiences with interests in history of science, fire history and policy, South African history, as well as global environmental history. It would also be a fine addition to a graduate seminar. … Pooley’s book demonstrates the distinctive insights of that an environmental history perspective can offer to wildfire management … which attests to the book’s relevance to an urgent global environmental issue.” (Michelle M. Steen-Adams, Environmental History, Vol. 21 (4), October, 2016)

“Burning Table Mountain is a work of history, and, as such, Simon Pooley tells the story based on painstakingly detailed evidence from state archives, historical newspapers, and the like, but he also relies on interviews with fire researchers and environmental managers. ... The book covers a lot of useful ground, and will certainly interest students of environmental history, fire management, and South Africa.” (Christian A. Kull, Journal of Historical Geography, Vol. 51 (1), January, 2016)

“Australia, Canada, Russia, and the United States constitute the world's primary ecological firepowers. Save for Isle of Fire, Christian Kull's study of Madagascar, scholarly history has not inquired much beyond them. That makes Burning Table Mountain a welcome addition to a limited genre that deserves wider appreciation. At least next time Table Mountain erupts in a daisy-chain of flames, followed by a riot of flowering geophytes, we'll have a reference to why the fire was inevitable and why humanity, nominally the keeper of the planetary flame, seems so impotent before its best friend and worst enemy.” (Steve Pyne, Journal of Southern African Studies, August 26, 2015)

“Written in a highly readable style ... will be particularly useful for professionals in the fynbos field academics, managers, policy-makers, for example. But it is also well worth reading by all of us 'amateurs' who love this flat-topped mountain and the unique fynbos vegetation that clothes it.” (John Yeld, Veld & Flora, Vol.101 (1), March, 2015)

“Simon Pooley has produced an excellent review of this issue, using the Cape Peninsula as a case study. ... this is an excellent and well-written book that has been thoroughly researched. Unlike scientific accounts, which rely heavily on the peerreviewed literature, this account uses a myriad of additional sources, including newspaper articles, minutes of meetings, annual reports and interviews to produce an account of fire that reflects the evolving opinions and actions of scientists, policymakers, managers and the public at large. It is the first serious treatment of the interrelated development of fire science and fire policy in South Africa, and it takes the reader into the topsy-turvy world of divided opinion and competing institutions that ultimately have more influence on responses to environmental issues than does science. As such, it should be regarded as compulsory reading for students and practitioners of fynbos management.” (Brian W. van Wilgen, South African Journal of Science, Vol. 111 (1-2), January-February, 2015)

“Burning Table Mountain contributes a fresh and innovative exploration of more than a century of science, history and environmental policy around the emotional topic of fires at the wildland-urban interface. Simon Pooley has produced a book that is not only fascinating, well written and excellently researched, but one which will be regarded as definitive for many years to come. Covering the entire span of settler occupation of the Cape Peninsula but focussing on the 20th century, by deftly weaving a multiplicity of sources, by contextualising fire policy, management and philosophy in the western Cape and beyond, his careful research an immense gap in our understanding of the growth of knowledge about fire but also of South Africa's human history. Through the prism of Table Mountain, Pooley engages with more than a century of controversy among scientists, policy makers and the public about the role of fire in South Africa, particularly in the fynbos of the renowned Cape Floral Kingdom. Pooley's book documents the growth of environmental and ecological knowledge and his work contributes to our scientific and historical understanding of this critically important driver of South Africa's vegetation.” (Jane Carruthers, Emeritus Professor, University of South Africa)

“Simon Pooley's Burning Table Mountain is a deeply researched but crisply written study of a flammable landscape and how people have understood, managed, and perhaps mismanaged it. More than a local South African story, it shows how land-managers wrestled with issues that confront mediterranean and semi-arid lands everywhere. An exciting addition to environmental history, history of science, South African history, and the history of fire.” (J.R. McNeill, author of Something New under the Sun and Mosquito Empires)

“South Africa is a fire-prone land. Simon Pooley has written an innovative and fascinating study of fire in the Cape Peninsula over the long term. This is the first sustained historical treatment of the subject and it goes some way to answering a key question: have the fires that sear Cape Town become more dangerous to natural fynbos, people and property? In the process, the book tells us a great deal about environmental history, Cape landscapes, forestry, indigenous and exotic plants, South African science and growing ecological understanding. The peninsula is both beautiful and blessed in its biodiversity. But it is crowded by a rapidly expanding city and exotic plants. This is a rich and multi-facetted discussion of the processes, human and natural. that produce fire as well as the means by which it may be controlled.” (Professor William Beinart, University of Oxford)

“Ecologists have known for decades that fire is essential for the healthy functioning of fynbos ecosystems. However, fire is a complex and destructive force as well and therefore needs to be carefully managed. Simon Pooley's 'Burning Table Mountain' is the most comprehensive account to date of the development of fire policy in the Cape Floristic Region and provides a detailed description of how fire practices have changed over the last 300 years. Using the Cape Peninsula as the focal area, for which most of the historical data are available, this book synthesises our knowledge of early burning practices undertaken by Khoisan and settler communities at the Cape. It then traces the development of fire research management in the wider Cape Floristic Region and how it is currently practiced. The influence of several important characters and outcomes of key research initiatives are discussed in wonderful detail and woven into a storyline that provides a rich and interesting account of how science and management are inextricably linked. It concludes with a focus on the major fires that occurred at the end of the 20th century on Table Mountain and warns of the potential impact of climate change on fire regimes in the Cape. Burning Table Mountain is essential reading for anyone interested in the complex wildland-urban interface where inappropriate fire management policies and practices have important repercussions for both people and the environment.” (M. Timm Hoffman, University of Cape Town)

“In this meticulously researched and lucidly written book, Simon Pooley exposes the reader to the myriad of contradictions and conflicts that arise when northern Europeans colonise a fire-prone ecosystem. Throw into the mix introduced invasive trees, a biota of exceptional diversity and a populace riddled with inequality, arrogance, ingenuity and passion and what you have is the setting for a riveting tale. Pooley's cogent message is that the fire regime concept currently couched in biophysical parlance must embrace the messy world of humans, their values and their institutions. How else can fire be comprehended in the densely populated regions where it holds sway and will continue to do so, despite a plethora of well-intentioned attempts to suppress it? This book is a must-read for social and natural scientists that grapple with the human-wildland interface in the vast areas of the world's fire-prone ecosystems.” (Richard Cowling, Nelson Mandela Metropolitan University, South Africa)