Reform and Transition in the Mediterranean
Free Preview 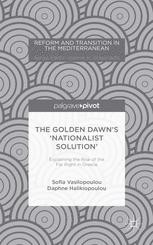 The Golden Dawn’s ‘Nationalist Solution’: Explaining the Rise of the Far Right in Greece

This book contextualizes the rise of the Golden Dawn within the Eurozone crisis. The authors argue that the movement's success may be explained by the extent to which it was able to respond to the crisis of the nation-state and democracy in Greece with its 'nationalist solution': the twin fascist myths of social decadence and national rebirth.

“The Golden Dawn’s ‘Nationalist Solution’ is a short study that provides a solid overview of the Golden Dawn’s ideology, discourse and the factors that shaped its rise. … the book is a useful addition to the literature about postwar fascism, European politics and political violence.” (Ryan Shaffer, Patterns of Prejudice, Vol. 51 (5), 2017)

"At last the fragmented media coverage of the Golden Dawn in English has been supplemented by a sustained, comprehensive study of its origins, social base, ideology, and place within the extended family of ultranationalist and neo-populist movements in Europe. The Greek authors not only write in a sophisticated, concise academic register that is a lesson to many native speakers, but show a refreshing familiarity with comparative fascism studies seen through the lens of the New Consensus. As a result Europe's most fully developed neo-fascist party can be seen in High Definition, not just providing insights about the Golden Dawn's derivativeness and originality, but allowing marginalized inter-war fascist movements to be understood as complex, living, constantly evolving social and political entities, that no matter how impotent, can still poison democracies and incite violence against mythic enemies. This book does for fascism what Jurassic Park did for dinosaurs.' -Roger Griffin, author of The Nature of Fascism and Modernism and Fascism

'The authors provide solid reference tools to understand the widening of the extreme right-wing party arena in Greece. Focusing on the Golden Dawn, the authors offer a dispassionate and scientific analysis that places the rise of a pro-Nazi militia in a complex of causal links between demand-side and supply-side explanations. This is an important contribution to our comprehension of the electoral breakthrough of Golden Dawn.' - Vassiliki Georgiadou, Associate Professor of Political Science, Panteion University, Athens, Greece