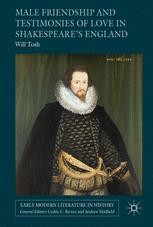 Male Friendship and Testimonies of Love in Shakespeare’s England

Male Friendship and Testimonies of Love in Shakespeare’s England reveals the complex and unfamiliar forms of friendship that existed between men in the late sixteenth century. Using the unpublished letter archive of the Elizabethan spy Anthony Bacon (1558-1601), it shows how Bacon negotiated a path through life that relied on the support of his friends, rather than the advantages and status that came with marriage. Through a set of case-studies focusing on the Inns of Court, the prison, the aristocratic great house and the spiritual connection between young and ardent Protestants, this book argues that the ‘friendship spaces’ of early modern England permitted the expression of male same-sex intimacy to a greater extent than has previously been acknowledged.

“Through a reading of [Anthony] Bacon’s archive at Lambeth Palace, Tosh identifies the myriad aspects that constituted a Renaissance friendship: Ciceronian (and almost Petrarchan) ideals, ‘affectional transactions’, ‘chivalric brotherhood’. …  It is at once spry and judicious, humane and knowledgeable; it has, in another of Francis Bacon’s remarks about friendship, ‘peace in the affections and support of the judgment’.” (Robert Stagg, Times Literary Supplement, Issue 5947, March, 2017)

“This book, part of the Palgrave series Early Modern Literature in History, is a valuable addition to the long-standing examination of major figures in Elizabethan England as well as to more recent areas of study such as queer theory and affect studies. As a whole, the book nicely reminds us that affectionate terms shared by men in letters were not only used to support political and economic alliances, but could also indicate heartfelt intimate connection as well.” (John S. Garrison, Renaissance Quarterly, Vol. 70 (4), 2017)

“Will Tosh’s lucidly written new study of the topic adds to our understanding of this phenomenon, and may inform further work on the subject. … Tosh is very good on the ways in which sites of friendship might be exploited for political purposes … . This balanced, judicious, well-documented account is a pleasure to read, and will inform our future understanding of affective cultures in general, as well as offering valuable insight into the lives of the individuals concerned.” (Tom Macfaul, The Review of English Studies, December, 2016)

“Yoking together a meticulous review of correspondence around Anthony Bacon with a lucid assimilation of theoretical work in queer studies and epistolarity, Tosh offers gripping case studies of early modern "affectional transactions." His book bristles with new facts about how men represented their emotions to one another; its interpretive work with those representations dramatically enriches scholarship on same-sex networks and the uses of friendship. Not only do theory and close historical work seamlessly clasp hands -- and perhaps because of that -- this book is also a joy to read.” (Laurie Shannon, Northwestern University, USA)

“This engaging book is a biography of Anthony Bacon, the brother of Francis Bacon and an important figure in the national and international politics in the last decades of Elizabeth’s rule. It is also a biography of the network of male friends in which Bacon moved. Dr Tosh’s grasp of the historical and theoretical issues is excellent, but it never overwhelms the series of interconnected narratives that he narrates so skilfully. Male Friendship and Testimonies of Love in Shakespeare’s England is an informative and enjoyable book that taught me a good deal and that should find a wide readership.” (Stephen Guy-Bray, Department of English, University of British Columbia, USA)

“Will Tosh’s Male Friendship and Testimonies of Love in Shakespeare’s England is the first book devoted to Anthony Bacon, elder brother to the philosopher and statesman Francis Bacon, and himself a central figure in the volatile English politics of the 1590s.  Working entirely with archival manuscript materials, Tosh reconstructs Anthony Bacon’s intimate relationships with a series of men, throwing new light on the worlds he inhabited – in foreign intelligence, the Inns of Court, and the household of the controversial earl of Essex. In a series of nuanced readings, Tosh sheds new light on the complex mix of connections between men in late Elizabethan England, showing them to be simultaneously instrumental and affective.  In so doing, he opens up new ways of exploring the queer desire embedded at the heart of early modern political life.” (Alan Stewart, Columbia University, USA)