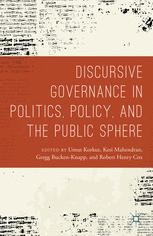 Discursive Governance in Politics, Policy, and the Public Sphere

This book studies the dynamics of political discourse in governance processes. It demonstrates the process in which political discourses become normative mechanisms, first marking socially constructed realities in politics, second playing a role in delineating the subsequent policy frames, and third influencing the public sphere.

“The volume offers a wide range of contributions to several highly actual problems (such as the migration problem or the future perspectives of the welfare state), and sophisticated analyses about their impacts on concrete policy fields. Researchers interested in the topics of European integration or gender equality, and in critical or feminist perspectives could also read it with interest.” (Gábor Illés, Intersections, Vol. 2 (1), 2016)

Book Title
Discursive Governance in Politics, Policy, and the Public Sphere
Editors
Copyright
2015
Publisher
Palgrave Macmillan US
Copyright Holder
The Editor(s) (if applicable) and The Author(s)