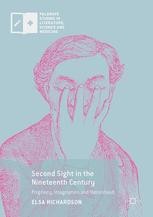 Second Sight in the Nineteenth Century

This book explores the phenomenon of second sight in nineteenth-century literature and culture. Second sight is a form of prophetic vision associated with the folklore of the Scottish Highlands and Islands. Described in Gaelic as the An-da-shealladh or ‘the two sights’, those in possession of this extraordinary power are said to foresee future events like the death of neighbour, the arrival of strangers into the community, the success or failure of a fishing trip. From the late seventeenth century onwards, rumours of this strange faculty attracted the attention of numerous scientists, travel writers, antiquarians, poets and artists. Focusing on the nineteenth century, this book examines second sight in relation to mesmerism and phrenology, modern spiritualism and anthropology, romance literature and folklorism and finally, psychical research and Celtic mysticism. Tracing the migration of a supposedly ‘Scottish’ tradition through various sites of nineteenth-century popular culture, it explores questions of nationhood and identity alongside those posed by supernatural phenomena.

Elsa Richardson is Lecturer of History at the University of Strathclyde, Scotland, where she is affiliated with the Centre for the Social History of Health and Healthcare and the Scottish Centre for Victorian and Neo-Victorian Studies. She researches and publishes on the historical interactions between medicine and the imagination, science and the supernatural, psychology and the occult.

“Second Sight in the Nineteenth Century: Prophecy, Imagination and Nationhood is its interdisciplinarity. Richardson convincingly draws readers through the entanglements of positivist scientific discourse, literary aesthetic production, and nationalist rhetoric to argue that each participated in a larger project: the colonization of the Scottish imagination.” (Jayda Coons, The Wilkie Collins Journal, wilkiecollinssociety.org, April 25, 2019)

“Elsa Richardson's excellent book represents a seminal work in interdisciplinary studies of supernatural culture in the British Isles. Her refreshing and insightful study throws the much-neglected phenomenon of second sight into the limelight, revealing how its narrative traditions shaped the emerging disciplines of spiritualism, anthropology and psychical research. This book is a 'must-read' for all students and scholars interested in the ever-changing boundaries between magic, epistemology, and science.” (Dr Sasha Handley, Senior Lecturer in Early Modern History, University of Manchester, UK)

“Dramatically and admirably extending the range of spiritualism studies beyond the familiar limits of the imperial metropole, Richardson’s ground-breaking new study demonstrates the hitherto unrecognized significance of Scottish second sight for nineteenth-century understandings of historiography and the supernatural alike. Through a series of compelling and lively case studies, Richardson argues convincingly that the previsionary traditions of the Celtic fringe were central to, and disruptive of, major Victorian investigatory projects such as phrenology, anthropology, psychical research, mesmerism.” (Prof Christine Ferguson, Professor in English Literature, University of Stirling, UK)