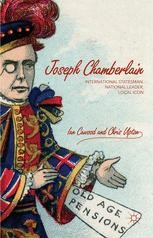 Winston Churchill described Joseph Chamberlain as 'the man who made the weather' for twenty years in British politics between the 1880s and the 1900s. This volume contains contributions on every aspect of Chamberlain's career, including international and cultural perspectives hitherto ignored by his many biographers. It breaks his career into three aspects: his career as an international statesman, defender of British interests and champion of imperial federation; his role as a national leader, opposing Gladstone's crusade for Irish home rule by forming an alliance with the Conservatives, campaigning for social reform and finally advocating a protectionist economic policy to promote British business; and the aspect for which he is still celebrated in his adopted city, as the provider of sanitation, gas lighting, clean water and cultural achievement for Birmingham – a model of civic regeneration that still inspires modern politicians such as Michael Heseltine, Tristram Hunt and David Willetts.

Ian Cawood is Reader in Modern History and Head of History at Newman University, UK. He is also Programme Leader for the MA in Victorian Studies and a senior fellow of the Higher Education Academy. His most recent book is The Liberal Unionist Party: A History (2012).

Chris Upton was Reader in Public History at Newman University, UK, author of A History of Birmingham (1993) and Living Back to Back (2005), among many other scholarly and popular publications. He was a regular columnist for the Birmingham Post and historical consultant for the BBC, the National Trust, the Birmingham Museums Trust, the Guardian and Birmingham City Council. Chris Upton sadly died in October 2015, shortly after completing this book.

“This collection greatly contributes to our understanding of one of history’s might-havebeens – tremendous focus, but in the end too much focus and not enough flexibility. This is not a comprehensive biography of Chamberlain, but covers much of the basic ground while throwing light not only on less explored aspects of his career but late 19th century politics in general.” (Stewart Rayment, Liberator, Issue 388, January, 2018)

“This volume brings together in printed form various papers presented to a conference at Newman University, Birmingham in 2014 commemorating the centenary of Chamberlain’s death. … This book is an excellent and most welcome addition to the study of Joseph Chamberlain and of British politics in the late-Victorian and Edwardian eras.” (Dr. Iain Sharpe, history.ac.uk, September, 2016)

"Joseph Chamberlain, the only British politician to have split both major parties, pioneered all the changes that were to distinguish twentieth-century politics from nineteenth - the extension of democracy, the development of local government and a national system of education, indeed the idea that the state has a social responsibility for all of its citizens. He was also the first to sense the decline in Britain's international position and to appreciate that rapid and bold action was needed to avert it. No one can understand twentieth-century Britain without coming to grips with him. This volume provides an excellent approach to his career." - Vernon Bogdanor, King's College, London, UK

"This collection of essays, derived from a conference held to mark the centenary of the death of Joseph Chamberlain in 1914, is by turns scholarly and spiky, sceptical and sympathetic, and always a highly entertaining read. It explores, and re-interprets, Chamberlains many-sided activities, as a controversial and creative boss of Birmingham politics, as a constructive yet destructive force in British public life, and as a commanding but disappointed statesman of Empire. As such, it is the best book on Joseph Chamberlain since Peter Marsh's magisterial biography, and there can be no higher praise than that." - David Cannadine, Princeton university, USA