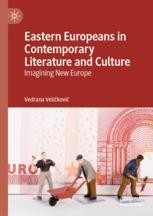 Eastern Europeans in Contemporary Literature and Culture: Imagining New Europe provides a comprehensive study of the way in which contemporary writers, filmmakers, and the media have represented the recent phenomenon of Eastern European migration to the UK and Western Europe following the enlargement of the EU in the 21st century, the social and political changes after the fall of communism, and the Brexit vote. Exploring the recurring figures of Eastern Europeans as a new reservoir of cheap labour, the author engages with a wide range of both mainstream and neglected authors, films, and programmes, including Rose Tremain, John Lanchester, Marina Lewycka, Polly Courtney, Dubravka Ugrešić, Kapka Kassabova, Kwame Kwei-Armah, Mike Phillips, It’s a Free World, Gypo, Britain’s Hardest Workers, The Poles are Coming, and Czech Dream. Analyzing the treatment of Eastern Europeans as builders, fruit pickers, nannies, and victims of sex trafficking, and ways of resisting the stereotypes, this is an important intervention into debates about Europe, migration, and postcommunist transition to capitalism, as represented in multiple contemporary cultural texts.

Vedrana Veličković is Principal Lecturer in English Literature at the University of Brighton, UK. Her research interests are in contemporary literature, specifically Black British and postcommunist writings. Previous publications include articles and book chapters on the intersections between postcolonialism and postcommunism, Bernardine Evaristo, Dubravka Ugrešić, Vesna Goldsworthy, and literary theory.

“The breadth of research Vedrana Veličković has carried out here is impressive. This book offers a highly topical read for those interested in representations of Eastern Europe in contemporary literature and film, while also shedding new light on evolving ideas of Britishness. The influx of East European labour at the beginning of this century has changed Britain irrevocably. Veličković provides a fascinating study of the cultural and political reflections of that change.” (Vesna Goldsworthy, Professor in Creative Writing, University of Exeter, UK, and author of Inventing Ruritania The Imperialism of the Imagination (1998))

“Eastern Europeans in Contemporary Literature and Culture is an important, timely, and engaging contribution to critical conversations about labour and race in the enlarged Europe. As the first book about the representations of Eastern European migrants in contemporary British literature and culture, it skilfully connects public debates leading to the Brexit vote to broader perceptions that ‘new’ Europeans from the East both increase the European Union’s diversity and threaten its unity.” (Nataša Kovačević, Professor of Postcolonial and Global Literature, Eastern Michigan University, USA, and author of Uncommon Alliances: Cultural Narratives of Migration in the New Europe (2018))
Show all