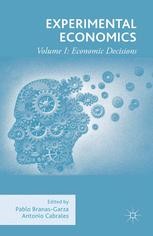 How do humans make choices, both when facing nature and when interacting with one another? Experimental Economics Volume I seeks to answer these questions by examining individual's choices in strategic settings and predicting choices based on experimental methodology.

Pablo Branas-Garza joined Middlesex University as Professor of Behavioural Economics in October 2012. Previously he was Professor of Economic Theory at the University of Granada, Spain, since 2008. He did his PhD in Quantitative Economics (1997) in the University of Córdoba, Spain. His research focuses on experimental games and economic behaviour. More specifically he works on altruism and cooperative behaviour, cognitive abilities and preferences.

Antonio Cabrales is Professor of Economics at University College London. Formerly, he was a Professor at Universitat Pompeu Fabra in Barcelona, Spain and Universidad Carlos III in Madrid, Spain. He holds a PhD in Economics from the University of California, San Diego, US. He has worked in a wide range of topics: learning and evolutionary games, experimental economics, industrial organization, the economics of networks and mechanism design. He is an associate editor at the Journal of Economic Theory, and SERIEs. He has been an Editor of the Berkeley Electronic Journal of Economic Analysis and Policy and Investigaciones Económicas; and Associate Editor of the Journal of the European Economic Association. He is founding partner of a financial consultant (Serfiex S.A.) and has been a consultant on competition policy issues.

He has published in the American Economic Review, Journal of Political Economy, the Review of Economic Studies, Physical Review Letters, PLoS ONE, Scientific Reports and other scholarly journals.