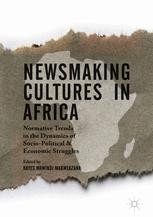 Normative Trends in the Dynamics of Socio-Political & Economic Struggles

This book contributes to a broadened theorisation of journalism by exploring the intricacies of African journalism and its connections with the material realities that underpin the profession on the continent. It pulls together theoretically driven studies that collectively deploy a wide range of evidence to shed some light on newsmaking cultures in Africa – the everyday routines, defining epistemologies, as well as ethical dilemmas. The volume digs beneath the standardised and universalised veneer of professionalism to unpack routine practices and normative trends shaped by local factors, including the structural conditions of deprivation, entrenched political instability (and interference), pervasive neo-patrimonial governance systems, and the influences of technological developments. These varied and complex circumstances are shown to profoundly shape the foundations of journalism in Africa, resulting in routine practices that are both normatively distinct and equally in tune with (imported) Western journalistic cultures. The book thus broadly points to the dialectical nature of news production and the inconsistent and contradictory relationships that characterise news production cultures in Africa.

“Mabweazara has put together an impressive collection that offers an encyclopedic yet nuanced understanding of journalism in Africa. The contributions are theoretically grounded and sparkle with novel insights and analytical sophistication. The book should be a mandatory read not only for scholars interested in journalistic practice in the continent, but for anyone curious to understand the clash between journalistic ideals and various challenges in today's world. The book is not only a valuable effort to de-westernize journalism studies; it also delivers thoughtful arguments about why a close understanding of on-the-ground realities is mandatory to refine normative visions of the press and journalism.” (Silvio Waisbord, Professor of Media and Public Affairs, George Washington University, USA)

“My most enthusiastic congratulations to the editor and authors of Newsmaking Cultures in Africa for bridging the gap between understanding journalists in their particular local contexts, recognizing the cultural specificity of newswork, and articulating journalism in Africa with journalisms around the world. I especially appreciate how this book does not fall easily in the 'dewesternise media studies' camp, but instead offers a much more nuanced and complex picture of local particularity, global similarity, interdependence and crossover.” (Mark Deuze, Professor of Media Studies, University of Amsterdam, Netherlands)

“This is a much-needed volume that contributes original and hitherto understudied evidence and theoretical frameworks on journalism in Africa. The authors collectively illustrate how journalism is historical and context driven. Altogether this is a must-read volume that provides fresh, fascinating and nuanced frameworks on journalism beyond the Anglo-Saxon models which have so far been central to its practice and thinking. Hayes Mabweazara and his team must be commended for inviting the academy to take seriously the trajectory of journalism in Africa and other non-Western contexts.” (Winston Mano, Reader and Director of the Africa Media Centre, University of Westminster, UK)

“Newsmaking Cultures in Africa examines at least six broad areas (journalism education, freedom, tabloidisation, new technologies, conflict environment, and conduct-ethics) with foci on nine countries...the breadth of geographical coverage of sub-Saharan Africa is commendable. The uniqueness of this anthology lies in bringing together, sensibly, familiar as well as fresh analyses of professional practice cultures in African journalism. Although it eschews North Africa, the book would be useful to scholars, practitioners and students of journalism, sociology and politics in Africa and beyond.” (Fred Mudhai, Senior Lecturer in Journalism and Course Director MA Global Journalism, Coventry University, UK)