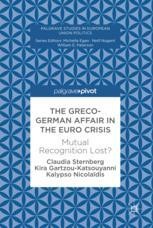 The Greco-German Affair in the Euro Crisis

This book focuses on one of the most highly charged relationships of the Euro crisis, that between Greece and Germany, from 2009 to 2015. It explores the many ways in which Greeks and Germans represented and often insulted one another in the media, how their self-understanding shifted in the process, and how this in turn affected their respective appraisal of the EU and that which divides us or keeps us together as Europeans. These stories illustrate the book’s broader argument about mutual recognition, an idea and norm at the very heart of the European project. The book is constructed around a normative pivot. On one hand, the authors suggest that the tumultuous affair between the two peoples can be read as “mutual recognition lost” through a thousand cuts. On the other, they argue that the relationship has only bent rather than broken down, opening the potential for a renewed promise of mutual recognition and an ethos of “fair play” that may even re-source the EU as a whole. The book’s engaging story and original argument may appeal not only to experts of European politics and democracy, but also to interested or emotionally invested citizens, of whatever nationality.

Kira Gartzou-Katsouyanni is a researcher at the European Institute of the London School of Economics (LSE), UK. Previously, she worked at the European Commission in Brussels and Athens.

Kalypso Nicolaïdis is Professor of International Relations and Director of the Centre for International Studies at the University of Oxford, UK. She is Chair of Southeastern European Studies at Oxford and Council Member of the European Council of Foreign Relations.

“The language used is very evocative, making this short book both rich and suggestive, as well as accurate. Through the lens of mutual recognition, the authors are able to say something different on a very well known topic as the Euro crisis. They analyse relations between states from a very interesting perspective, taking into consideration the importance of national stereotypes. This makes it an interesting read … .” (Vanessa Bilancetti, JCMS Journal of Common Market Studies, Vol. 57 (6), November, 2019)
“If the burden of the past reminds us that relations between Greece and Germany have not been easy at times, this has not always been the case. German national identity was shaped in part by ancient Greek culture, while the foundation of modern Greece took place during the rule of a Bavarian king. This book provides a highly valuable insight into the complexity of Greek-German relations within the EU and into the role of unjust stereotypes often dominating public debate.”  (Nikos Kotzias, Greek Minister of Foreign Affairs)

“This book is exceptional. It offers a highly valuable contribution to the literature on the ‘euro crisis’ as, unlike most work on the subject, the authors go far beyond a mere financial perspective. In doing so it manages to reshape our awareness of key European values.” (Sigmar Gabriel, German Minister of Foreign Affairs)

“With all that has been written about the recent crisis in Europe, few scholars have paid close attention to how Europeans see one another, how much that has changed during the course of events, and whether those changes have had a lasting impact on the willingness of European to remain engaged in their common Project.  This book is a rare exception. It is essential reading for anyone who seeks to look beyond the many stereotypes to understand where Europe has been and where it is headed.” (Erik Jones, Johns Hopkins University, USA)

“This innovative book illuminates key challenges around the cultural construction of a shared Europe through a remarkable exploration of how Greeks and Germans were portrayed during the eurozone crisis. A must read.” (Kathleen R. McNamara, Georgetown University, USA)

“When the history of the Euro crisis is written, Greece and Germany will take centre-stage. This volume, which explores the crisis and the ‘Greco-German’ affair, is a short book, but a big book. By analysing this core highly conflictual relationship from the perspective of each side within an overarching framework of mutual recognition, the authors provide a very fruitful lens on the destructive dynamic of the crisis. The volume also turns to the future and the need to repair and build on mutual recognition in the EU. The volume is testimony to how precious but challenging transnational governance and politics are.” (Brigid Laffan, Director, Robert Schuman Centre for Advanced Studies, European University Institute, Italy)

“This is a superb account of the passionate and contentious Greek-German dance at the heart of Europe’s debt crisis. In their brilliant book, Sternberg, Gartzou-Katsouyanni and Nicolaïdis use a discursive lens to analyze mutual perceptions and popular narratives that emerged in Europe's Northern core and Southern periphery from 2010 onwards. They paint a carefully documented and meticulously researched picture of the euro crisis’ setting, its players and their high stakes game, finding ultimate solace in the promise of mutual recognition. The political dynamics they uncover will shape the process of European integration in years to come, and anyone who cares about Europe’s future will learn from reading this book.” (Matthias Matthijs, Johns Hopkins University, USA)

“This fascinating short book transcends intellectual boundaries. It blends a specific and differentiated analysis of Greek and German media coverage during the Euro crisis with a general theoretical reflection on the centrality of a wide and multi-faceted concept of mutual recognition at the heart of the European project. The authors plea for a transformation of mind-sets and behaviour by using mutual recognition as a main political compass to navigate the EU through its future challenges. An inspirational and entertaining read for all European citizens -- among them, hopefully, many of its politicians.” (Hartmut Mayer, University of Oxford, UK)

“This short book packs a powerful punch that provides an original lens through which to explore how Europeans understand each other and themselves. Its brilliant account of the rupture of mutual recognition makes for grim reading but also presents a useful way to understand how the construction of Others can shape the dynamics of European integration. It is a must read for anyone interested in how the European Union has reached the precipice and how it might find its way back. It provides a detailed account of how the German and Greek press constructed the Other and the Euro crisis within a conceptual framework of mutual recognition, which will be of great use to rapidly growing interest in interpretive approaches to European integration.” (Vincent della Sala, University of Trento, Italy)

“It is very hard indeed to be the child of two warring parents, and much harder still to be the child of two warring nations. This […] academically-informed interrogation of a Greek-German love affair turning sour offers both a newly insightful perspective on the cultural hinterland of sovereign debt crisis, and a hope for the future. Can we forge understanding for the other within the betimes distressing noise of communication and miscommunication between nations? Perhaps we can: the culture wars which have recently been fought out in the German and Greek press are occasionally depressing but, [s]een through the heightened senses and understandings of the ‘Mischling’, they also offer an unparalleled advance in the creation of a shared narrative which can and does (at least, sometimes) re-write our histories to form a basis for our common recognition.” Michelle Everson, (Birkbeck College, USA, and Christian Joerges, Hertie School of Governance and Centre of European Law and Politics, Bremen, Germany)

“Dominant visions of European integration are still informed by a diplomatic perspective in which national and European institutions are key actors of a largely ritualized process. This most timely book tells a different story, in which discourse, symbols and emotions play a major role, the border between national and EU politics is blurred, and one witnesses the somewhat brutal development of center – periphery relationships in the EU. Arguably, this new approach will be of great help to understand the European response to the challenges it currently faces.” (Renaud Dehousse, President, European University Institute, Italy)

“As the largest creditor and the largest debtor, Germany and Greece were predestined to clash in the fallout from the eurozone crisis. This clash was often framed on the basis of the obligations created by the German past and the failures of the Greek present. In this struggle the power of the strong was pitted against that of the weak. The resultant tensions created by this iconic clash strained the bonds of mutual recognition. This superb study charts the representations and misrepresentations employed by both parties in the course of this elemental struggle. The history of the European Union was largely one of economic fair weather till the onset of the Global Financial Crisis. Maintaining mutual recognition in fair weather is not a huge ask but it is quite a different matter in economic foul weather. [This] proved too much for the United Kingdom […].” (William E Paterson OBE, Aston University, UK)