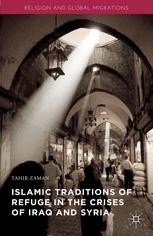 Islamic Traditions of Refuge in the Crises of Iraq and Syria

This book considers positions refugees take relative to the state, humanitarian actors and faith-based organisations in the humanitarian field. Attention is drawn to refugee agency as they negotiate circumstances of considerable constraint demonstrating relational dimensions of religious practice and experience.

Tahir Zaman is a visiting research fellow at the Center for Research on Migration, Refugees & Belonging (CMRB) at the University of East London, UK, and a Senior Teaching Fellow at SOAS, University of London, UK. His research is primarily focused on the social and cultural lives of displaced people in the Middle East.

“Zaman makes an important contribution to understandings of the refugee experience in the Muslim world, as well as the interaction between religion, the agency of the refugee, and the humanitarian aid regime. … I strongly recommend this book to anyone interested in notions of humanitarianism, traditions of refuge and sanctuary in Islam, as well Iraqi forced migration post the 2003 Anglo-American invasion of Iraq.” (Dawn Chatty, Journal of Islamic Studies, Vol. 28 (3), September, 2017)

'This is an impressive work which reminds us to turn our gaze to those left behind when mass forced migration grabs headlines. Tahir Zaman does an admirable job of exploring the networks of self-reliance, the traditions of hospitality, and the notions of refuge and sanctuary among those hosting refugees in Syria and in the Middle East region as a whole.' - Dawn Chatty, University of Oxford, UK