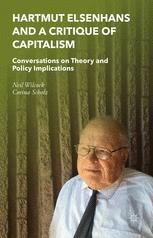 Hartmut Elsenhans and a Critique of Capitalism

This book presents a series of interviews with Hartmut Elsenhans on his wide-ranging theories and their policy implications. Serving as a compilation of his distilled thoughts, we discuss with him his unique world economic theory, his theorisation of social movements, his work on overcoming underdevelopment, and much more.

Neil Wilcock did an undergraduate degree in economics and international relations at the University of Aberdeen, UK, and a master's degree on the Erasmus Mundus Global Studies programme hosted by the Global and European Studies Institute, University of Leipzig, Germany. His principal fields of interest lie in political economy and the European Union. Neil is originally from Glasgow in Scotland.

Corina Scholz is also a graduate of the Erasmus Mundus Global Studies programme. A German national, she first graduated at the University of Erfurt, Germany, in political sciences, economics and study of religion. Her main interests are development and the international political economy.

Hartmut Elsenhans is a German political scientist and Emeritus Professor of International Relations at the University of Leipzig, Germany. His principle focuses are economic theory, development studies, national and social emancipator movements, and the European Union. He is currently working on a six volume series on his world economic theory.

“This book is a great resource for instructors of undergraduate courses in international/global political economy or development economics, as a supplement to graduate-level courses in these areas and to everyone interested in gaining insights into a modern critique of capitalism and economic policy, which one cannot place squarely in the ‘left’ or in the ‘right’ of the political spectrum.” (Daniel S. Leon, Leipzig, Comparativ -Zeitschrift für Globalgeschichte und vergleichende Gesellschaftsforschung, Vol. 28 (3), 2018)

“Scholz and Wilcock have presented a highly valuable and fun-to-read piece. … It is a great present Scholz and Wilcock have made them … in making his original theories and concepts challenging conventionally accepted axioms potentially more accessible to a wider public.” (Christoph Sorg, Global Politics Review, Vol. 2 (1), April, 2016)

'Hartmut Elsenhans is one of the most outstanding scholars on Capitalist World System theory: on rent theory, marginality, underdevelopment, and underconsumption. This idea-driven book should help to re-discover his 'grand theories' a timely contribution to the discussions on inequality and poverty.'

'This book does justice to Hartmut Elsenhans' incredible range of interests and equally matched erudition. He is contentious, controversial and convincing in equal measures the hallmark of true originality.'